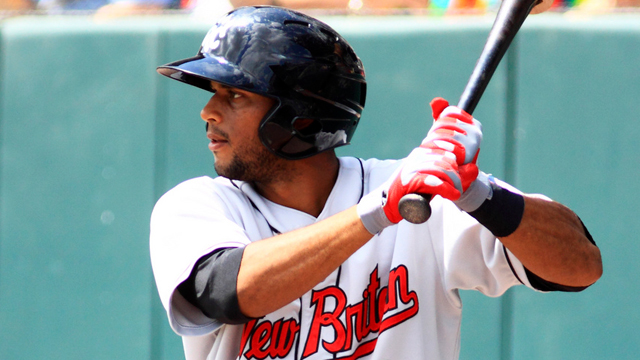 Terry Ryan announced all the way back in December that that there was an open competition for the starting centerfield job. Darin Mastroianni, Joe Benson and Aaron Hicks were the contenders. Essentially, now it is a 2-man competition, with Joe Benson struggling out of the gate. In fairness to Benson, he was injured most of 2012, and probably was rustier than the other two. As of this writing, Hicks has a .306/.352./.633 line with 4 home runs, 4 doubles, 4 walks, 13 RBIs, 3 stolen bases and 14 Ks in 49 at-bats. Mastro has a .400/.448./.560 line with 4 doubles, 3 walks, 6 stolen bases (1 caught stealing) and 3 Ks in 25 at-bats.

On paper, perhaps, this looks like a real competition. The reality, however, is that Hicks already has won. He won by coming out of the gates and demonstrating that 2012 -- his season of emergence as the legitimate prospect we all were waiting to see -- was not a fluke. He won by hitting 3 home runs in a game. He won by showing that his defense was major-league ready (not that Masto is any slouch!). He won by living up to the hype, and the pressure, that Terry Ryan created. He may be slowing now that the caliber of the pitching competition has increased. But make no mistake: Aaron Hicks has already won.

Mastro is, best case, a placeholder. Not to imply that he couldn't occupy centerfield for a season or two and do a -- serviceable -- job. But I don't think it should come as a shocking statement to suggest that he's not a legitimate, full-time centerfield option for most teams. Hicks, on the other hand, could -- should -- develop into a solid centerfielder.

2013 is turning into another lost season, not because of what actually looks to be a decent offense, but because of (again) another below-average pitching staff. Vance Worley is likely the opening day starting pitcher. Cole De Vries and Liam Hendriks will see time in the rotation. Kevin Correia has already been getting shellacked. And this leads me to the other reason why Hicks has won: public perception -- promises. Right now, Twins fans need something to hope for. Miguel Sano is still, best case scenario, a full year away from the bigs. Our new pitching prospects look good, but aren't yet ready for Target Field. Justin Morneau may be on his way out, either during the season as part of a trade, or as a free agent next winter. Long story short, Twins fans need something about which to be excited. After the announcement of the centerfield "competition," and Hicks' performance, fans have just that: something to be legitimately excited about.

For Terry Ryan to announce a competition, to state in no uncertain terms that service time issues will not come into consideration, and then to award the job to the "runner up," would be a disastrous PR move for the Twins. More than that, it would be a slap in the face. This fan base has suffered enough, and as I previously have suggested, I firmly believe that the front office has not been as upfront as it should have been with respect to this organization's short-term future. Luckily, Ryan's very public statements, and Hicks' very solid play, have made the centerfield decision, in my opinion, academic. If Hicks continues his solid play (yes, I admit he has slowed down), there is no reason he shouldn't be patrolling centerfield when the Twins open up the season. Anything less, at this point, is a further disservice to this fan base, whose patience has been, and continues to be, tested.
Posted by Andrew at 8:55 PM 2 comments: