Would You Like to Buy a Tree for Charity? 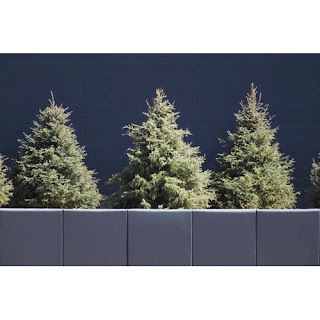 I read with great interest the saga concerning the batter's eye black spruce trees at Target Field. When I visited Target Field last June, I actually thought the trees were a great natural feature, and it was cool to imagine what they might look like in another twenty years. Half of me understood the player complaints, namely, that the trees could sway during windy days, thereby prettymuch defeating the purpose of a batter's eye. The other half of me (that cynical part that seems to win out most of the time) thought that these complaints lacked validity, and recalled that I did not read about players from visiting teams voicing similar complaints. Nonetheless, it wasn't altogether surprising when the Twins announced that the trees were being removed, and would be relocated to other parts of the stadium, with the exception of a couple trees that were to be auctioned off.

So, had you been in the market for a 14 foot tall black spruce tree, authenticated by MLB, you were probably very excited when the Twins announced the auction. I happened to stop by the Twins' MLB auction website this afternoon, and was surprised that the auction had commenced, and was, in fact, already almost over. As of 10 pm eastern time on March 16, there were 4 bids, and the current high bid was $1,400. At first glance, this sounds like a lot of money -- and it certainly is. But you have to look a little closer.

If you are a Twins die-hard, this is a piece of living history that you can own; second, at its current price, it really is not a bad deal. A quick search of spruce trees that are around 14 feet tall reveals that a price of at least $1000, plus shipping and installation, is common. For slightly more, you are getting a unique piece of history that has been well cared for. For all the complaining Michael Cuddyer did about these trees, I bet for an extra $200 to charity, he'll personally install the thing in your backyard. He seems like that kind of guy. Plus, since he's not yet playing in games, I think he could benefit from the manual labor.

You are also donating to charity. The auction indicates that 90 percent of the purchase price is donated, which is pretty darn good. Although I am not a tax attorney, I think that a portion of the purchase price (whatever you pay over the cost of that a normal 14 foot spruce would cost) would be deductible on your 2011 taxes.

The Twins MLB Auction website, here, is actually a great website. They have autographed baseballs, bats and memorabilia from most Twins' greats, as well as a lot of baseball cards. Many items end without bids at all, so it's not tough to find a good deal. I purchased a Harmon Killebrew autographed official MLB baseball a few months ago, and was the only bidder. He was one of the few Twins legends whose autograph I did not have, so I thought it was a good opportunity to get something to make me happy, yet also do something good with my money. If you haven't been to the auction website, it's worth a few minutes of your time. And, if you have $1,500 to burn on a tree, check in soon!
Posted by Andrew at 9:24 PM