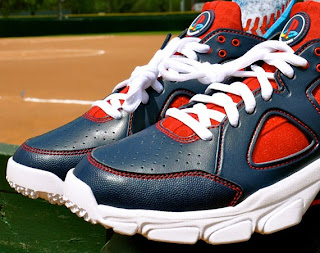 In support of what has become an increasingly long list of product endorsements, Joe Mauer will be on hand at the Mall of America on Saturday morning to help introduce his new shoe, the Huarache Zoom TR Low. Reportedly, this shoe will be styled with the Twins' colors of navy, red and white, with one of the footbeds featuring an image of Mauer's swing. It is sure to become a popular item.

As of this writing, the cost of the shoes is uncertain, but a pair is rumored to be approximately $184. Although this is certainly a steep price to pay for shoes, it is important to note that it is simply "market value" for a premium shoe manufactured by a quality company with a solid reputation. This shoe design is essentially one-of-a-kind. It should be noted, however, that early reviews of the shoes have noted a couple "chronic" problems in the test samples, including unusually quick weardown on the soles; these problems can often be treated, but the shoes will need to be taken in for repair and, consequently, will often be unavailable for short periods of time. As a result, the reviewers recommended giving the shoes at least one day off per week from their "shoe rotation" in order to maximize their longevity, thus ensuring that the consumer realizes the most value from their purchase.

Economists also noted the possibility that there could exist buyers' remorse after they get the shoes home and wear them for a while. Reported one reviewer, "what once felt to the consumer like a 'must-have,' maybe even a 'no-brainer,' may, in retrospect, seem like it was not such a good deal. People might get these shoes home, wear them for a while, and then realize that, maybe they could have purchased several cheaper pairs of shoes for the same price, or even have augmented other parts of their wardrobe instead of getting these shoes. But now they're stuck with these shoes forever."
Posted by Andrew at 9:48 PM