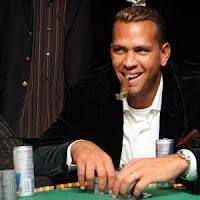 Between his arrogant and annoying off-the-field behavior, his arrogant and annoying on-the-field behavior, and just the fact that he is generally a first-class, PED-using, illegal gambling jerk, I don't have very much respect for Alex Rodriguez. Now, don't get me wrong: he is a talented baseball player, and I would like to think that many of his seasons were played without the assistance of illegal substances. But, we don't really know, and, as with hundreds of other ballplayers, probably never will. But I know enough about A-Rod to know that I wouldn't like to have him over for dinner.

A-Rod was the most recent player to reach 600 home runs. Living near the New York sports market, I can tell you that this was followed almost as much as Derek Jeter's methodical pursuit of 3,000 hits. And I'm sure you remember the national media coverage on ESPN surrounding A-Rod and 600. 3,000 hits and 600 home runs are both important and relatively rare accomplishments. Like others, however, I lament that there is not more national coverage of Thome's march to 600.
I agree that Thome's run to 600 may not be quite as exciting to the casual baseball fan for the following reasons: he is old; he is playing for a 4th place Midwest team in a weak division that has little shot at making the playoffs; and he is not "sexy" in terms of advertising and merchandising like A-Rod, Derek Jeter and other such personalities. But, damn it, he's our guy Jim Thome, the one that wears the lumberjack flannel, the one that makes Target Field look like a hitter's park, and we have a duty, as Twins fans, to root for him and watch as he makes history, hopefully at Target Field. For Thome's pursuit of 600 -- untainted by steroid allegations - - is a much more historical and important event for the integrity of baseball than was A-Rod's pursuit of the same.
When Thome does hit number 600, I'm sure it will be the lead story on SportsCenter that night, and it will probably be the headline on espn.go.com/mlb for the next day. But we know it's much more important than that, especially in this 2011 season that has been disappointing for Twins fans on many fronts. I look forward to what others have to write about in the coming days as Thome makes history. National media outlets may drop the ball on this one, but I have faith that our local newspapers and Twins bloggers will come to the rescue and give Jim the respect that he has earned.
Posted by Andrew at 1:06 PM