Time for my weekly update of all that happened in the Twins' farm system last night. I was at the Rock Cats game last. It wasn't a great game for New Britain -- not nearly enough offense, and our pitchers had some trouble keeping the ball down. Terry Ryan was in attendance. I spoke to him for a few minutes, and it sounds like he plans to follow the team through its upcoming weekend series in New Hampshire, as we get closer to the date when a few players on this team might get a call-up to Minnesota (or, if the Rock Cats make the playoffs, after their playoff stint ends). Ryan was scoring the game and taking furious notes, but he was very nice in person and willing to chat between innings. Here's a rundown of tonight's minor league action:

ROCHESTER 0, LEHIGH VALLEY 1
Nick Blackburn (hey, remember him?) started for Rochester tonight, and went 7 innings. He gave up 1 run on 7 hits, striking out 2 and walking 2. Anthony Slama had a solid performance, going 2 scoreless innings, striking out 3 and walking 1.
The Red Wings mustered only 4 hits all night. Evan Bigley had 2 singles in 3 at-bats, and Chris Parmelee and Wilkin Ramirez also singled.

In addition to the shaky starting pitching, New Britain didn't get nearly enough offense. I liked what I saw from Josmil Pinto -- he hit a no-doubt homer to left field in the 4th inning, after walking in his first AA plate appearance. Oswaldo Arcia had a nice line drive double down the right field line, and also struck out and walked. Chris Colabello, Deibinson Romero and Rene Tosoni also singled.

As with the Rock Cats, there wasn't enough Mircale offense to get the job done tonight. Daniel Ortiz was 2-for-3 with a double, Daniel Santana had 2 singles, and Daniel Rams and Kyle Knudson each singled.

BELOIT 6, PEORIA 9
This game went 12 innings, until Peoria scored 3 runs in the top half to take what proved to be the final lead of the game. Tyler Jones went 5 innings in his start, giving up 3 runs on 3 hits and 3 walks, but he did strike out 8. Corey Kimes tossed 2 and 1/3 innings, and also gave up 3 runs on 3 hits. Kimes walked 3 and struck out 1. Taylor Rogers was very effective in relief, going 2 and 2/3 innings and allowing 2 hits, striking out 2. Tim Atherton worked 1 and 2/3 innings out of the pen, giving up 3 runs on 4 hits and 3 walks. Corey Williams worked a scoreless 1/3 of an inning, walking 1 and striking out 1. Snappers pitchers walked 10 hitters this evening.

Wang-Wei Lin was 2-for-7, JaDamion Williams was 2-for-5 with a walk and 3 Ks, Eddie Rosario had a single and 3 Ks in 6 at-bats, Kennys Vargas was 1-for-3 with a double, a walk, an RBI and a K, and Drew Leachman, Matthew Koch, and TwinsDaily's own Adam Pettersen all singled. Rosario, Pettersen, and Stephen Wickens all stole bases tonight, as well.


ELIZABETHTON 3, GREENEVILLE 4
Angel Mata went 4 and 1/3 innings in his start today, giving up 4 runs on 3 hits. He struck out 3, walked 5, and allowed 2 home runs. Joshua Burris went 2 and 2/3 innings, and allowed only 1 hit while striking out 5. Great performance from him. Tyler Herr tossed 2 scoreless frames, striking out 3 and walking 1.

Byron Buxton had a great day, going 3-for-5 with a triple and a stolen base. Candido Pimentel and Max Kepler each doubled (Kepler with an RBI), and DJ Hicks, Romy Jimenez and Travis Harrison all singled.

GCL TWINS 2, GCL ORIOLES 0
Andre Martin got the start, and went 4 innings. He allowed only 3 hits, struck out 5 and walked 1. Sam Gibbons also tossed 4 innings, giving up only 1 hit, striking out 1 and walking 1. Felix Jorge tossed the final frame, striking out 1, as well.

Joel Licon had the big hit today, a 2-run homer that accounted for all of the Twins' runs. John Murphy doubled, and Aderlin Mejia and Bryan Harr both singled.

Pitcher of the Day: Tom Stuifbergen

Hitter of the Day: Byron Buxton 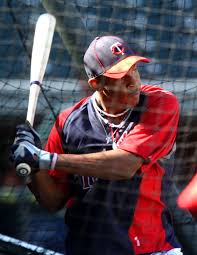