In Defense of Michael Cuddyer . . . Sort Of 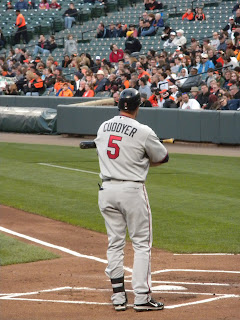 Some thoughts on Michael Cuddyer, a player who I do not personally dislike, but who I believe has no place on this team after 2011:

1) His salary for 2011 was determined 5 days after the end of the 2009 season. Yes, that's the same season that he filled in admirably at first base for Justin Morneau, and had many clutch hits and RBIs down the stretch. Undoubtedly, the Twins would not have come back to win the division without Cuddyer that year. It was Cuddyer's agent that did the good bit of negotiating that caused the Twins, in November, 2009, to give Michael the substantial raise that he is receiving, but not earning, now. Doubtful the front office will agree to that kind of scheduling again!


2) At least the guy doesn't make excuses. Only one and a half months into the season, I have heard enough about weak legs, the flu, oblique strains, and mental problems that magically manifest themselves in physical symptoms (Francisco Liriano). Say what you will about Cuddyer - - it is probably deserved -- but he has played where he is asked to play, has not completely embarrassed himself in the field, and has not asked for days off. His batting average (though great relative to other Twins players) is subpar, he has shown absolutely no ability to drive in runners, as Howard Sinker recently noted, and it feels like he's going to come close again to leading the lead in one of the most frustrating stats, grounding into double plays. But, notwithstanding that, he is one of 4 or 5 genuine MLB players that we have in the lineup, and the last thing I expect him to do is ask for a day off.

3) I actually like the guy. If he were to be stuck in suburban Hartford, Connecticut, and needed a ride somewhere, or a hot meal, I would have no problem with that. We might even have a beer or two.

Let's pretend for a minute that the Twins manage to get healthy, pull the season together, and, stay with me here . . . win the World Series in 2011. I know, it feels unlikely now that they will even get to .500. But, for the sake of argument, let's say that happens. Regardless of what happens to Cuddyer in 2012, if the Twins win the World Series, he's going to go down, eventually, as some sort of hero in Minnesota.

I am the biggest Kent Hrbek fan of all. I grew up at exactly the right time to enjoy his prime, and to feel sad when he retired. He was a fan favorite, had his share of great games and key plays, and gave good sound bites, but he was never a marquis player. Granted, in his best years he was better that Cuddyer was, however, he never reached the upper echelon of major league baseball players. But, Kent Hrbek was the first baseman on 2 World Series teams, the last World Series teams in Minnesota. I know Hrbek likes to fish, and frequents the lakes and resorts in northern Minnesota. I have it on good authority, also, that he enjoys having a few drinks after a day on the lake, and have heard great stories about Hrbek talking to fans, just like us, sharing beers and shooting pool, at places like Grand View Lodge and Madden's. Kent Hrbek is immortal in Minnesota, literally, because his number 14 is retired, and figuratively in the hearts of people like me. A native Minnesotan, he wisely stayed there and let his legend grow.
If the Twins were to somehow pull it together this year, Cuddyer, a career Twin and the most senior member of the organization, might deserve to have his number 5 retired just as much as Kent Hrbek did. History is interesting, and also revisionist. Today we complain about Cuddyer grounding into double plays and failing in the clutch. Assuming postseason success, twenty years from now, we might remember a key play or two of Cuddyer's, a very good postseason OPS, and the fact that the guy never asked out of the lineup.


The bottom line is this: we can scream about Cuddyer all we want; he is overpaid for the production he has given in 2011 so far; and I have no confidence in him batting in a clutch situation. If the other veterans on this team decide to get healthy and contribute, however, some of the heat will be taken off of Cuddyer, he can bat 7th or 8th in the lineup, and perhaps he will produce down there. If not, and if the Twins can't turn this season around, we have an extra $12 million to devote to middle infield, starting pitching, or the bullpen in 2012.
Posted by Andrew at 9:44 PM