I think I was 10 or 11 when one of our family cats, Lucy, died. She had to be 15 or so, was a great cat, and had a wonderful life. I remember crying to my parents, "Poor Lucy," and my mom or dad responded, "Poor Us." Lucy, of course, was fine, in heaven, or cat heaven, or wherever you believe that beloved pets go. It was us that she left behind.
Not to draw an inappropriate parallel between the death of a family pet and the death of a human, Hall of Fame ballplayer, and hero like Harmon Killebrew, but that's what I thought yesterday after I heard the news and read scores of tributes and quotes about Harmon. "Poor Us." I was born in 1981 and missed Harmon's playing days, but I have read and heard enough about him over the years as a Twins fan to know that he was "one of us," and that he exemplified all that was--and is--great about baseball. I think the best tributes have been in the comment sections of the Star Tribune articles on Harmon, where literally hundreds of Minnesotans and baseball fans are sharing personal stories of their interactions with Harmon. The common themes: unfailingly polite, humble, talkative, and, oh yea, the greatest player to wear a Twins uniform.

It's tough when such a well-respected and revered public figure like Harmon Killebrew passes on. It's tough here, perhaps, because he contracted a very aggressive form of cancer, which I'm sure caused him considerable pain in the end. We don't like to think about that stuff, but it happens, even to greats like Harmon. But he had a great life and career, clearly touched a lot of lives, and showed us how, even in tough times, one can keep their dignity.
Poor Us. 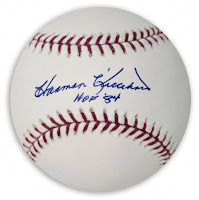