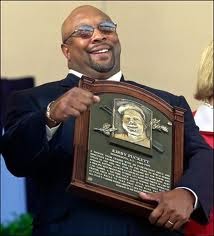 As I've mentioned before, I love this time of year because sportswriters vote for candidates for the Baseball Hall of Fame. It's a crazy and imperfect process, and it usually angers me somewhat. I have enjoyed reading others' blog posts listing their ballots, and advocating both for and against the candidacy of suspected or "convicted" steroid users. In short, everyone has an opinion on each year's Hall of Fame candidates, and they always make for good reads.

It's interesting to think what his home run and hit totals would have been had he not lost those 3 prime years of his career to military service. In terms of hits, even a conservative estimate of 170 hits (lower than the average of his number of hits in 1942 and 1946), yields and extra 510 hits and pushes Williams over 3,000 for his career. Similarly, adding 35 home runs per year for those 3 missed seasons gives Williams 626. Of course, speculation like that involves a slippery slope. Who knows if Williams would have been hit in the head with a foul ball while in the on-deck circle, thus ending his baseball career? One the one hand, speculation and conjecture in favor of the player doesn't seem appropriate, but on the other hand, it seems right to at least think about it. Williams was an inner-circle hall of famer either way, but I think it's worth noting that his 3 years of military service that came during the prime of his career did impact his numbers. And after ballplayers leave us -- especially ballplayers of that generation -- that's what we look at.

What about Bert Blyleven? I, among others, have noted that he played several years of his career pitching for some not great teams. Others have noted that he played for some small market teams, and perhaps that's why he didn't make more All-Star teams or garner more national recognition during his playing days. I think there is probably some truth in those statements. But the implication of those statements is that, had Blyleven played on better teams, he would have won more games, and would have been a lock for the Hall of Fame upon his retirement. It's a dangerous road upon which to tread. Should we credit Blyleven with more wins, or at least more notoriety now, because he was a very good pitcher on some not very good teams? It doesn't seem right. But I think we should know about it.

And then there's my hero, Kirby Puckett. Forced to retire at age 35 after only 11 seasons in the major leagues, Puckett was one of the best and most consistent hitters of his time. More than that, he was a great center fielder in his prime, winning 6 Gold Gloves. He was also a 10-time All-Star. Kirby had a great final season in 1995, batting .314 with 23 HR and 99 RBIs, having made the switch to right field. His season ended somewhat prematurely when his jaw was broken by a Dennis Martinez fastball on September 28 of that year. He was 35 then, and still a very good player. After Puckett was diagnosed with glaucoma in early 1996, he retired. So that was it. A stellar 11 year career: 2,304 hits; 207 home runs; a career batting average of .318; oh yea, and those 2 World Series titles. Puckett, of course, was elected to the Hall of Fame in his first year of eligibility, receiving 82.1 percent of the vote. Had Puckett simply retired because he got tired of baseball, his career was still Hall of Fame-worthy. But it's fair to acknowledge that the unfortunate circumstances of Puckett's health, and the fact that he was still playing good baseball, likely impacted the lens through which some voters viewed his candidacy. Is it fair to think that, had Kirby averaged only 140 hits through 5 more seasons of baseball (he would have continued at right field and likely ended as designated hitter), he would have become a member of the 3,000 hit club, and probably would have accumulated his 300th home run along the way? For me, it's fair to think about it and put it in writing. I'm not saying that Kirby definitely could have played until he was 40, but it's in the realm of possibility.

Rule 5 of the Baseball Writers Association of America Election Rules provides: "Voting shall be based upon the player's record, playing ability, integrity, sportsmanship, character, and contributions to the teams(s) on which the player played." It seems, on one hand, like a voter is confined to what happened on the field, but on the other hand, the rule also mentions integrity, character and sportsmanship -- all things that don't have a statistical measure. So clearly a voter can (well, maybe the voter must -- the rule uses the word "shall") look beyond a player's stats and career accolades. But how far beyond? I don't think it's fair to put an asterisk next to Ted Williams' official stat sheet in the Hall of Fame to note that he probably would have been a member of the 600 HR club, or that Kirby Puckett, even in decline, could have reached 3,000 hits, but I do think it's fair that if a player was on the cusp in some voters' minds -- and maybe Puckett was -- to cast a vote for that player partially based on what could have, or should have, been. This will be an interesting discussion when Ken Griffey, Jr. comes up for election. Sure, he's a first ballot hall of famer either way, but I'm curious what writers like Rob Neyer and Joe Posnanski will choose to mention about Griffey's awful injury history and the number of hits, home runs, and other milestones that Griffey's aggressive play cost him. What do you think? Should voters be restricted to what's on the page, or is there room for discretion?
Posted by Andrew at 8:55 AM