It feels strange to even suggest that 2012 could be a make or break year for a 30 year old with over 1,000 major league hits, 185 HR, and 4 All-Star appearances, but I struggle to find another term to describe exactly how important this season will be to Morneau and his family, the Twins, and their fans.

We're 5 full seasons removed from Morneau's MVP year. And that was a fantastic season for him -- 34 HR, 130 RBIs, and batting .321 to lead a great Twins team to the playoffs. Yes, that was probably Morneau's best season, but we also saw a fantastic half-season in 2010, when Justin was batting .345 with 18 HR and 56 RBIs until he suffered the infamous concussion in Toronto. And it's never been remotely the same since. Even looking at Morneau in interviews, you can just see that he doesn't sound or feel the same. He's lost some confidence, I'm sure, and it shows. And how could you not lose confidence or faith after what he has gone through?

2012 will be telling, certainly. Were I making the lineups, I wouldn't even have Morneau play the field for the first half of the season, if at all possible. Between Joe Mauer, Ryan Doumit and Chris Parmelee (who I think, because of the Morneau injury and Parmelee's own good audition, could earn a spot on the opening day roster), the job can be done, well enough, by others, such that Morneau could or should just focus on hitting and health up until the All-Star break.

If Morneau can't DH and maintain his health enough to play 130 or so games, the realist in me thinks that 2012 is it for him. I really want to be positive about things, but it's increasingly difficult to ignore all the interviews, and the diminishing number of games played since 2008 (163; 135; 81; 69). Morneau could reach a point, and maybe he already has, where he is risking further permanent damage to himself by continuing to play baseball. The guy has a wife and young child now, so perhaps his priorities have shifted over the past couple years.

At the same time, though, Morneau was a gamer from 2005-2008, and he has that competitive fire that most other Twins players seem to lack, so you want to give him every last chance to succeed and to regain his health. The Twins drafted Morneau, brought him up through the farm system, and slowly but surely watched him become a star. He also had become one of the best defensive first basemen in the league. It's easy to say that Mauer, Doumit or Parmelee can play first base. Sure, they can physically occupy that position and make the majority of plays that come their way, but Morneau spent years working diligently to become not just "a hitter who plays first base," but a hitter and an elite first baseman. You can't just put a warm body on the correct part of the field and expect the same results over a 162 game season.

The Twins owe Morneau $14 million both in 2012 and 2013. If Morneau can't stay off the disabled list the majority of this season, I don't even know what to do. Do you quietly try to coax him to retire after 2012? Do you try to be optimistic for 2013 if things look at promising by the end of this season? Kirby Puckett was forced into retirement because he lost vision in an eye. It was very sad when it happened, and sudden, but this almost seems worse because it is so protracted. As a fan who likes to imagine that the Twins have infinite financial resources, I say you give Morneau every last opportunity through 2013, and at that point it's time to quit. The realist in me, however, realizes that $14 million out of a $100 million payroll is significant -- it's roughly the value of a decent free agent pitcher. If it looks like Morneau can't put it together by 2013, I suggest that the Twins put Morneau in some sort of front office position, as they did with Puckett, and immediately retire #33. He's a very personable, funny guy, and I'm sure he could do well as some sort of ambassador for Twins baseball.

But for now, I hope it doesn't come down to that. Gardy can do his best to manage Morneau's playing time, and hopefully we'll see in Spring Training that his bat looks better than it did last year. This upcoming April will be my 3rd consecutive year traveling to Camden Yards for the Twins' games against the Orioles. It's telling that the first year I went to Baltimore, Morneau wasn't even in the state, and last year he didn't emerge from the training room. Let's hope that 2012 will be different. 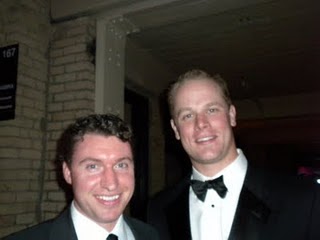