Is this heaven? No, it's New Britain 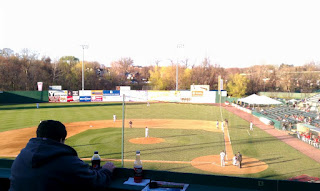 Opening Day is special for fans and players alike -- especially for players in the minor leagues who are working their way up the system and hoping to latch on with a new, better team each season. After spending some time with Alex Wimmers and the other Rock Cats players the other night, I have a new found respect for what these guys are going through. Tonight, I attended the New Britain Rock Cats opening night against the dreaded Richmond Flying Squirrels, AA affiliate of the San Francisco Giants.

You can read an official game re-cap here, but I thought it might be enjoyable to read this fan's perspective of the Rock Cats' 3-2 opening day victory. I'll begin by noting that it was a chilly night in central Connecticut. It was 45 degrees for the first pitch, and 42 by the time the game ended. It was also blustery out. Not quite the t-shirt and shorts weather that we had a couple weeks ago, unfortunately, and I think it affected both teams' pitching decisions. Lucas French, making his first New Britain start, was solid. He gave up only 2 hits in 5 innings, striking out 4 and walking 2. The stat line is great, and I would say that French was very good -- but not great. Interestingly, his fastball seemed to be his worst pitch tonight. Perhaps it was the weather, but early in the game he was throwing it very, very high, consistently. Luckily his off-speed stuff (couldn't tell whether it was a curve or a change-up from where I was sitting) was excellent, and he kept the hitters guessing and off-balance. In the first inning, he also picked off the leadoff batter for Richmond on a nice play. There weren't too many hard hit balls of of French, and he also induced a nice double play grounder to finish his evening.


On the Rock Cats' offensive side, Evan Bigley provided the big hit, and it was in the first inning. After newly acquired Darin Mastroianni led off the inning with an infield single, Bigley smashed a double over the head of the center fielder. He probably hit it 390 feet, and very hard. More of a line drive than a fly ball. Mastroianni, who had by then advanced to second, scored easily. In the third inning, following a James Beresford leadoff single, Chris Herrmann hit a first-pitch RBI single to the hole between first and second to score Beresford. Thereafter, Bigley grounded into a double play, but Mastroianni (who had walked after the Beresford single) scored.

Both starting pitchers were pretty solid, but both exited the game after 5 innings. After the sun set, it was really cold, and a bit windy. By this point, Rocky the Rock Cat was curled up in the fetal position atop the home dugout, presumably trying to draw heat from the Rock Cats' dugout radiant heating system. OK, that part didn't happen. But I had to imagine that it was a little rough on pitchers tonight.

The Rock Cats held a 3-0 lead until the 9th inning. Daniel Turpen, who had pitched a scoreless 8th for New Britain, was unable to get it done in the final inning. He gave up 2 singles to start the inning, then recorded two outs. The next batter hit an infield single to second base. Actually, Beresford made a great play at second to keep the ball in the infield, but because both runners were going on contact, 2 runs scored. All of the sudden, it was a game. Lester Oliveros came on and struck out the final batter to earn the save for New Britain. Here's the box score. 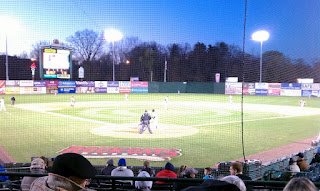 Winners for the evening: French, for pitching 5 scoreless innings when it was pretty cold, and picking off the first batter that reached base. Bigley, for coming through with a big double early in the game. Herrmann had two hits, as did Beresford. They get honorable mentions.

Losers: No losers because the good guys won. But I will say that Hicks didn't look great at the plate. He was 0-for-4. In one at-bat that I paid particular attention to, he took 4 pitches (I think), and was ahead in the count, before ultimately swinging at pitch that wasn't very good. But he played well in center.

All in all, it was a good start for New Britain. The attendance was listed at 4,653, but by the time the game ended, there were probably 250 people there. I liked what I saw from the pitchers, and the defense was very solid. No skipped throws to first, no funny routes on fly balls. In other words, the fundamentals looked good for so early in the season. I'll be heading back in another couple weeks, if not sooner (I want to watch Wimmers start), so I plan to provide game summaries and pictures from each outing.