To say that it's a big year for Francisco Liriano is an understatement. He's coming off an awful 2011 (except for that no-hitter), he's trying to prove that he can stay healthy for an entire season, and he's pitching for a contract, whether it's from the Twins, or any of the other teams in baseball that might be interested in a lefty with a nasty slider. Earlier this winter, I made my case for trying to extend Liriano before Spring Training even started. Clearly, the Twins (and possibly Liriano) had no interest in that. So now, the Twins are faced with the options of extending Liriano during the season, trying to lock him up after the season, trading him for a potential haul during the season if the team isn't in contention and Liriano looks great, letting him walk, or possibly having to offer him a 1-year, $12.5 million deal in order to get draft pick compensation under the new collective bargaining agreement. That's a lot of money for the Twins, even with some of the starting pitching dollars likely coming off the books next season. Clearly, then, there is a lot at stake this season for both Liriano and the Twins. 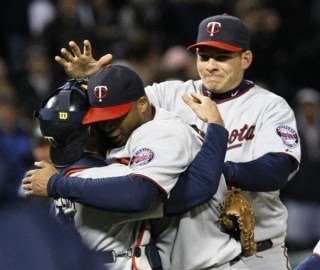 I really think that we're going to see a Liriano this season that closely replicates his 2010 success. All the indicators are there: he showed up to camp healthy and in shape after pitching a little during the winter; he has not walked many batters this spring; for the most part he has kept his pitch count reasonable, allowing him to last longer; and he still has been striking out a fair number of hitters. For Liriano -- or most any starter, for that matter -- those are the keys to success, and it looks like Liriano is mostly there. Look at the numbers for Liriano this spring: 27 innings pitched; 2.33 ERA; and most impressively, 33 strikeouts and only 5 walks given up. His WHIP is 1.11, after allowing 25 total hits. So, he has been a strikeout pitcher that pitches to contact. Compare his 2012 spring stats to 2010, when he threw 20 innings, compiled a 2.70 ERA, struck out 30 and walked 5. That spring, his WHIP was 1.20, and he gave up 19 hits. Pretty similar numbers, and reason for optimism.

Unfortunately, Liriano could be pretty great this year, and it might not mean a whole lot to the Twins. The Twins look like a team that will score runs, but will also give up runs from a "just average" defense and a potentially weak bullpen. Some of Liriano's good work, then, could be undone, either by a few hits that should be outs, or from a bullpen implosion after he exits the game. My projection for Liriano this season is the following: 14-11; 3.4 ERA; 210 innings pitched; 185 strikeouts. It will be a very good season for Liriano, and I think he'll remain healthy and lead the staff in victories. And following such a season, there's going to be a contending team that says, "hey, those 14 wins he got in Minnesota would have been 17 or 18 in (pick your choice of New York, Boston, Texas or some other good team)," and a couple of those losses from blown Matt Capps saves wouldn't have happened with us, because our closer is actually good and dependable! Simply stated, I think Liriano could price himself out of Minnesota with a solid 2012 season.