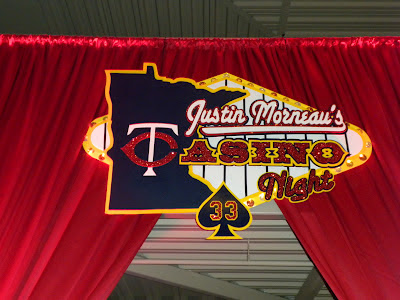 For the second consecutive year, my wife and I made the flight to Minnesota for Justin Morneau's Casino Night. It's a charity event for the Arthritis Foundation -- specifically, juvenile arthritis (Justin's niece suffers from juvenile arthritis). It's part of the Twins week of hope. Instead of hitting up a couple games at Target Field this year, we opted for this event instead, held at International Market Square, just a few blocks from Target Field. The Twins might not be very good this year, or even next year, but if there is one thing this organization does well, it is being active in the community and using celebrity to raise awareness and money for worthy causes. Yes, all sports teams do this stuff.

But, as I have mentioned before, good luck meeting Derek Jeter and Alex Rodriguez for under $1,000 per person, and good luck having a beer with David Ortiz in Boston for under $500. The Twins are accessible and in the community. In my mind, this event costs about as much as good seats to 2 Twins games, and quite frankly, I'd rather have a guaranteed good time at Casino Night.

This picture with Morneau was taken about 20 seconds after my wife accidentally knocked a full beer off the card table and onto the ground, just next to Morneau's feet. He was a good sport, mentioning that he'll forget about the the fact that his tux smells like beer until next June when he pulls it out of the plastic bag again.

This year, I've been doing a lot of Rock Cats stuff, and was looking forward to meeting Brian Dozier, whom I had watched several times last season but had never met. Yes, he's been up and down this season with respect to his defensive and offensive performances, and yes, there are going to be bumps and bruises along the way, but I do believe that he's the Twins' shortstop of the future. Also, he's an exceedingly nice human being. From speaking to loyal Rock Cats fans, I can tell you that he has not, and likely will not, forget where he came from.


Joe Mauer was a pretty big draw. Women, especially, wanted to congratulate him on his engagement. This was the first time that I met him in person, and I'm still shocked he doesn't hit for more power: the guy is huge -- even compared to the other players there. As you have probably read 1,000 times, Mauer was extremely nice to EVERYONE that wanted to talk to him. We spoke for about 5 minutes, and he asked me for an update on Alex Wimmers' progress after I told him where I lived and that I followed the Rock Cats players pretty closely.

It was a really fun night. The food was good, the silent and live auction items were great, the beer and wine were flowing, and most of the Twins players -- the ones you would want to meet, anyway -- were there. Here are a couple other snapshots from the night.