Bobby V. and the Red Sox

Posted by Andrew at 8:10 AM No comments:

The End is Here: Things I'm Going to Miss 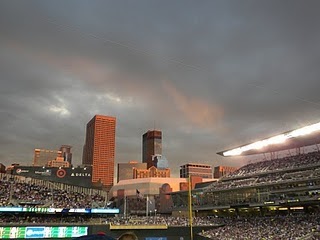 The fact that the Twins were awful for a second straight season admittedly diminished the amount of baseball that I watched this year, and I found it somewhat difficult to write about the Twins as the season dragged on, which is probably one of the reasons why I enjoyed covering the Rock Cats -- a winning baseball team. Still, though, it's always disappointing when the season comes to an end. Here is a little list of things that I will miss, or already do miss, about Twins-related baseball.

1. Checking for the lineups to come out each afternoon.

4. Going to Rock Cats games and sitting 1 row above the home dugout for $12 or so.

6. Watching Ben Revere highlights and arguing with people that still think that he can't be a serviceable major league center fielder.

7. Checking the overall baseball standings to find out where the Twins will draft in 2013 (4th overall).

8. Getting to know a few of the Rock Cats players through events at the ballpark and in the community.

10. Listening to the radio broadcast and being taken back to a time when I was 10 years old, laying in my childhood bed, quietly listening to John Gordon or Herb Carneal on 830 before I fell asleep.
Posted by Andrew at 8:23 AM 2 comments: