I Wonder If I Would Have Taken PEDs 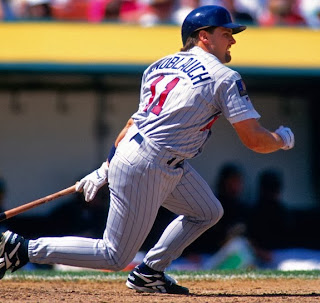 Let's make this clear from the start: I was never great at sports. Hockey -- I think I scored one goal in the couple years I played, and I quit right before checking started. Football and basketball -- just no. Soccer, I played goalie for the most part. I wasn't bad, but wasn't great, either. Long story short, if you don't like distance running, your options are limited in soccer. That left baseball as my best sport. I played VFW, Legion and JV, but was cut from the varsity team (Still an "ouch" moment for me -- thanks White Bear Lake Area High School baseball coaches for those lasting scars. And the team my senior wasn't even any good. OK, that was cathartic; I feel better. Thanks.). With respect to baseball, I was a periphery player, a guy right on the cusp. Never going to be a star, but a guy that wasn't bad and had some ability and a good grasp of the fundamentals. For a guy that was 5 feet 8 inches tall, and probably 145 pounds, I worked with what I had.

So many thousands of professional baseball players fall into that category -- guys right on the cusp, but that are unable to make it due to the amazingly high level of competition. AAA or AAAA-type players. Most of them never make the major leagues anyway, because that's just how the numbers work. But some do. Many (I gather), over the years, used some or other PED, but flew under the radar and were never formally accused or implicated. Others, like Mark McGwire or Barry Bonds, were implicated in a formal manner, and either confessed or did not. It's a huge mess. I'll tell you that, if I had a vote for the Baseball Hall of Fame, I would not vote for a Bonds or McGwire. I certainly know the strengths and weaknesses of such a stance, and it's really a huge mess. But I just can't vote for known juicers.

That stance, however, doesn't mean I don't sympathize. My profession -- an attorney -- requires some degree of intelligence (insert joke here), but nothing special. There's nothing you can do, apart from being a genius, going to Harvard, and clerking for a U.S. Supreme Court Justice, that will really set you up for certain success. In other words, if you're a moderately successful attorney on the "periphery," there's probably nothing more you can do than work your contacts in order to get to that next level. Baseball, though, is a little different. If you need to rebound from an injury quicker, or need to decrease the amount of time between muscle-building workouts, there are substances for that. Some are legal; many are not. If you're already a star with a gigantic guaranteed contract, like Joe Mauer for example, there's no real benefit for you. If you're a AAAA-type player, though, the situation might very well be different.

And I wonder what I would have done. Let's imagine -- just for a second because it's so ridiculous -- that I was good enough to get drafted in the later rounds of MLB's amateur draft. I'm small and a lefty, so that means I can only pitch. Let's also say I could throw 85. If someone told me that I could get an extra 3 or 4 miles on my fastball by taking a banned substance and continuing my workout regimen, I wonder what my response would have been? It'd be foolish to say "yes," but one can also see how it'd be foolish to say "no." I know I'm a good and moral guy in general, but the difference between having your career work out, and having it stall at High-A, is astronomical. I wonder if, given the opportunity and the apparent necessity, I would have taken PEDs? I still say no. But if you personalize the argument, it becomes much less "Player A committed a wrong and cheated," than it does, "Chuck Knoblauch, aging, took a banned substance to either speed his recovery from an injury or increase his chances of keeping a roster spot being threatened by a younger, cheaper player." Like anything else worth reading about, it's much more complex than black and white.

Luckily, baseball seems to be progressing from the PED era. Yes, there are still problems (Eddie Rosario recently testing positive for a banned substance, for instance). But things are much better now. My only real point here is that it's very, very easy and convenient to sit "on high" and judge players that have violated rules. And it's even easier to say, "no, they don't deserve a Hall of Fame vote." It's tougher, and perhaps fairer, to think about the individuals, and the profession in which they work. In the end, I still wouldn't vote for Bonds or McGwire for the Hall of Fame. And I really feel no sympathy for them. But that doesn't mean, though, that the PED issue isn't much more complex, and personal.