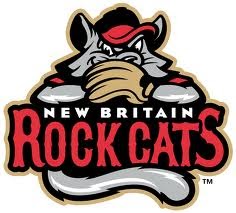 There is breaking Twins-related minor league news this afternoon in Central Connecticut, where it has been announced that the New Britain Rock Cats, which had done very well in the community and in terms of attendance, under owners Bill Dowling (former attorney for George Steinbrenner) and Coleman Levy (local attorney), is being sold to an investment group.

DSF Group, the purchaser, is a real estate and sports investment firm, and also owns the New Hampshire Fisher Cats (same division as the Rock Cats and AA affiliate of the Blue Jays), and the Bowling Green Hot Rods (Class A affiliate of Tampa Bay Rays). Interestingly, John Willi, who left the helm as the Rock Cats' general manager in 2010 to take a position at DSF, will be returning to that post.

I have a feeling that this is going to be an interesting story, especially as rumors have been floating around that the Rock Cats may change affiliation. I will be keeping track of this story and any further developments. But as a fan, as long as the ticket prices remain affordable, and the quality of baseball is good, I'll be happy to continue to support the Rock Cats.

Here's the article from the Hartford Courant detailing the sale.
Posted by Andrew at 2:38 PM