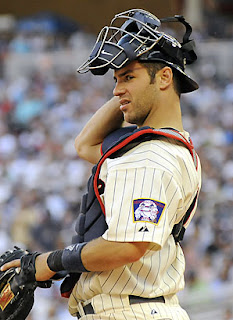 It's often said that balance is necessary in order to understand the universe. How can you define "hot" without understanding "cold," contemplate "good" without a concept of "evil," or truly appreciate a nice Napa Valley Cabernet Sauvignon without having a few boxes of Franzia wine in your past?

Joe Mauer has spoiled the Twins and their fans for much of his professional career. He exceeded most reasonable expectations, and he met even most unreasonable expectations. He mostly stayed out of the spotlight for the first several years of his career, despite being an All-Star. Sure, Gatorade, Head & Shoulders and MLB the Show came calling, but until 2011, no one really cared. And he kept clear of negative press -- have you ever heard Mauer say a negative word about anyone, or read a story about him showing up drunk at a club in the offseason?

If you believe that the Fangraphs "value" indicator is of any merit, Joe Mauer has provided $145.8 million in value to the Twins during his career, while being paid significantly less -- $57 million in total through 2011. Unfortunately, 40 percent of Mauer's career salary came in 2011, undoubtedly his worst season as a professional baseball player. Of that $23 million paid out in salary, the Twins received only $7.9 million in value. It should come as no surprise that an All-Star catcher isn't worth very much money if he isn't catching, if he isn't at Target Field in the lineup, or if he isn't even traveling with the team, all of which were the case at various points in 2011.

I'm not suggesting that Mauer's contributions to the Twins were a complete surprise, or were simply a "lucky break" for fans: he was the first overall draft pick in 2001 and was expected to be a star; us fans pay him very, very well to be one of the best players in the game; and he finagled a huge contract out of the Twins' ownership. I am, however, suggesting that I'm going into 2012 with a newfound appreciation for just how great Joe Mauer has been for the first half of his career.

If you're curious, Thrylos98 at the Tenth Inning Stretch has been doing some fantastic lists and rankings of all-time great Twins. For instance, he attempts to rank the all-time Twins most valuable player here, chronicles the season and career Twins OPS leaders here, and rates the franchise season and career slugging percentage leaders here. If you haven't, you should read these posts. But, even if you don't read this great work, I can cut to the chase for you: Mauer fares very, very well on all lists. In other words, halfway into his career, Mauer is already one of the best Twins -- ever.

Joe Mauer still has a lot of work to do in order to re-build his reputation as one of the game's best. He has to stay healthy, he has to catch regularly, and he has to bat over .300 in order to provide great "value" to the Twins -- whatever you definition of that word. But if there's one thing I can take from everything that was awful about Mauer's 2011, it's that it made me appreciate how great 2004-2010 were.

Twins fans -- and Mauer himself -- perhaps needed his 2011 season to happen. Without struggle, failure, and the realization that he is indeed aging as an athlete, fans might never have the opportunity to look at -- and appreciate -- 2004-2010 in a new light. And Mauer might not be coming into the second half of his career with a chip on his shoulder. Most overpaid veterans don't believe that they have something to prove going into Spring Training, but everything I have read the past several weeks suggests that Mauer is ready, perhaps for the first time, to shut critics up. Sure, I wish that Mauer's 2011 had been just as great as his 2004-2010, but that's not life. And because of that 2011, I think that fans are going to see a Joe Mauer in 2012 who, although familiar and friendly, will come ready to rebuild his reputation and lead the Twins into (hopefully) the next generation of competitiveness.