I've only been to Target Field twice -- once in 2010 and once last season. Long story short, I loved just about everything about the stadium. As one who grew up watching games in the Metrodome when players like Marty Cordova and Pat Mears played to crowds of 8,000, an outdoor, baseball-only stadium was a long time coming.

It's exciting to think that the Twins could host the 2014 All-Star Game. The last time the mid-summer classic was in Minnesota was way back in 1985. Dave Parker won the Home Run Derby, hitting 6. Total. Our own Tom Brunansky tied for second with 4. The derby was structured a little different back then -- each batter played 2 "innings," and each inning was comprised of 5 outs. So that's part of the reason why the HR totals were lower. In any event, it's exciting to think about Minnesota hosting this great event. Target Field exudes class, and we, as Twins fans and (some of us) Minnesotans should be proud to be on the short list for hosting this event.

If the Twins are selected to host the All-Star Game, Target Field will be all over ESPN and Fox the week of the event. As it's a relatively new stadium, I'm sure ESPN will have their crews behind the scenes talking about the limestone, the fire pit in the left field upper deck, and the Metropolitan Club outdoor deck, which is actually a pretty fun place to catch part of a game. The field will look great, with the red, white and blue banners and American flags, and hopefully plenty of visible TC logos. There is one minor change, though, that I'd like to propose:

99 percent of my Twins viewing occurs at home, usually on my computer. I subscribe to MLB.tv, and can watch the Minnesota feed of almost every home and away game. In the 100 or so games at Target Field that I have watched on my computer, the only -- and I mean only -- aesthetically unappealing aspect of watching the television coverage is the apparel worn by the vendors. Here's a picture. 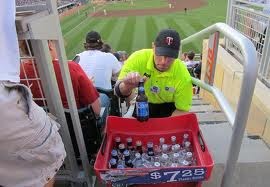 As you can see, it's fluorescent green, or neon green. Whatever you want to call it, I don't like it. I notice it less when I'm at the stadium, but in my opinion it sticks out like a sore thumb when watching a game on TV. I understand there are at least two reasons for the bright shirts: first, it allows supervisors to easily see what employees are doing, where they are working, and whether certain areas of the stadium need more or less coverage; second, it helps fans easily find vendors. Those are both legitimate business reasons, and are tough to argue with. But is there perhaps any other color that isn't so repugnant, but would still allow for management and fans to easily locate vendors?

The vendors seem to spend most of their time working the stairways between sections of the stadium. As a fan attending a game, I have never, ever had a problem trying to identify a vendor from, say, a fan: the vendors are the people that have the gigantic cartons of food or drinks, and the good ones creatively announce their presence and bark their product. And when there is a vendor present, I have rarely had a problem ordering a beer or hot dog. Somehow, even in the days before the neon outfits, this was never really a problem for me.

Target Field is pretty close to perfect. There is little to be done if the Twins are selected to host the All-Star Game. In my mind, though, when I think about Joe Mauer taking the field for the AL in 2014, or Prince Fielder participating in the Home Run Derby before a television audience of millions, the last thing I want to see on my television screen are several dozen neon green shirts in the background of arguably the classiest stadium in baseball.
Posted by Andrew at 9:07 AM