In what can only be seen as a 180 degree turnaround, the Minnesota Twins announced today that, in an effort to boost lackluster offensive numbers, beginning with the team's next homestand, players will begin batting from a location equidistant between second base and the pitcher's mound.

Stated Twins President Dave St. Peter: "After playing one season at Target Field, we were well aware of the statistics indicating that the stadium was, to say the least, stingy when it came to home runs and most other offensive metrics. We listened to the players in the offseason, deciding to remove those batter's eye trees, but it's clear that it simply hasn't made any difference at all. In fact, we're even worse this year. It was clear that we needed to go another direction, and signing Jose Bautista wasn't an option.

"Thus began the difficult conversation regarding whether to move the fences in. You see, aside from players from visiting teams, especially anyone wearing a Toronto or New York uniform, no one else has had very good success, due in large part to those damn trees, and just the size of the field. It was going to take a lot of manpower and money to move the fences in, and even with disabled list players willing to participate in the construction like Joe Mauer and Jim Thome, who are just sitting there and cashing checks, we decided it was going to be too much work. And in true Minnesota fashion, we didn't want to embarrass those nice construction guys who did a good job of building the thing in the first place.

"The next best option, then, was to move the players themselves closer -- much closer, in fact -- to the fence. We feel confident that by moving home plate approximately 90 feet closer to the center field fence, players such as Joe Mauer and Michael Cuddyer will see dramatic increases in their power numbers, and even players such as Drew Butera should exhibit so-called 'track power' on rare occasions.

"Now, we know what you're thinking, fans: Won't this result in an equal, if not greater, increase in the opposition's offense?? Long answer, yes and no. I should first note that we initially contacted Bud Selig to find out whether it would be fundamentally unfair for our players to bat from beyond the pitcher's mound, but for opposing players to bat from the original home plate. That was resolved by the Commissioner's office, pretty quickly and tersely I might add, and not in our favor. On the one hand, we acknowledge that it will be easier for everyone to hit the ball deeper into, and maybe even out of, the entire ballpark. On that note, we're recommending that fans in the left field bleachers wear helmets; the balls will be coming pretty fast. On the other hand, though, we still have a great crop of pitchers. We have always asked that they 'pitch to contact,' and we still will. If they give up 7 or 8 home runs in an appearance, well, that's the way it might roll sometimes, and we'll just have to work on keeping the ball down.

"This won't alter the way the Twins play ball. We'll still have two or three vastly overpaid players, at least one of whom is injured at all times; we'll have gaping holes at shortstop and backup catcher - - you can count on that; and we'll still walk number 8 and 9 hitters from time to time, because that's just what we do, it's what we teach players from day one."

When pressed for specifics, such as the movement of the foul polls, the erection of a new pitcher's mound, the relocation of the bases, and the generous amount of foul territory that Target Field will now have, St. Peter replied: "Listen, folks, those are details. I'm an idea man. We have a great team of interns, and veteran players, to work on those issues."

The following image is what St. Peter described as the official artist's rendering of the proposed changes to Target Field, though skeptics have claimed that it is, in reality, probably nothing more than a crude sketch, probably done on St. Peter's own computer: 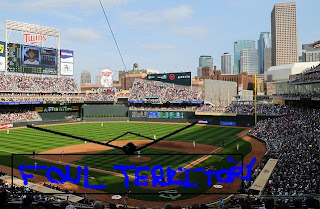