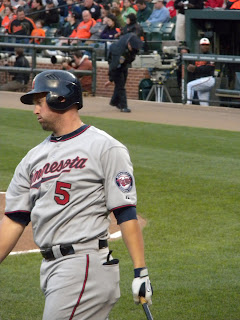 In a year in which the Twins sit comfortably in 4th place in the AL Central, 10 games under .500 halfway through the season, and decimated by injuries, there really was only one logical choice for Texas Manager Ron Washington, with respect to Minnesota Twins' position players: Michael Cuddyer.

This is, in fact, the same Michael Cuddyer that I poked fun at over his large contract and ability to perform magic tricks, and the same guy that took forever to record an RBI on an actual base-hit. In the face of significant injuries to perennial All-Stars Justin Morneau and Joe Mauer, as well as disappointing injuries to would-be All-Stars Jason Kubel and Denard Span, suddenly, Cuddyer's season was starting to look pretty good. As in past years, he played right field, first base and second base in place of injured Twins, and again, he never asked out of the lineup for those daily bumps and bruises that inevitably come with the territory. Again, he filled in adequately. Interestingly, however, his bat has really come alive the past couple months. As Pat Reusse noted today, after May 10 of this year, Cuddyer is batting .319 with 13 doubles, 8 HRs, and 30 RBIs. Sure, that doesn't excuse his slow start (.242 with 3 doubles, 3 HRs, and a shockingly low 4 RBIs from Opening Day-May 10), but it does cast doubt against those of Cuddyer's critics who call him an overpaid, double-play machine. In short, he's been doing what a middle-of-the-lineup guy is supposed to do: have a respectable batting average, hit for power, and drive in runners.

Will Cuddyer go down as one of the greatest Twins All-Stars? No way. But on this team, in this year, Cuddyer is one of the few reasons that the Twins have not already become sellers. I went on record in February stating that, if Cuddyer had a 2011 that was similar in production to 2009, the Twins would re-sign Cuddyer somewhere around 3 years and $27 million, or $9 million a year. On the other hand, if he had another subpar year, I expected 3 years and $18 million, or $6 million a year. Right now, it's tough to predict exactly where Cuddyer will finish up. I don't think he's going to equal his impressive 32 HRs and 94 RBIs from 2009, but he could still have a better than average year. At this point, even if the Twins decide to sell off some spare parts, I will be surprised if they move their lone All-Star, and I will be shocked if the parties cannot reach an agreement in the off-season to ensure that Cuddyer remains a Twin for another few years. When that day comes, it will certainly generate some good blog postings around Twins Territory.
Posted by Andrew at 10:48 AM