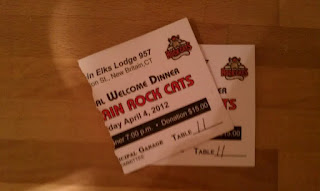 As much as I love going to Twins games, there's something special about minor league baseball. It's intimate and personal. It's real and unadulterated -- both the good and the bad. Every year, the New Britain Rock Cats host a "welcome home" dinner for the team, the front office and the fans. This year, it was held at the New Britain Elks Lodge #957, just a stone's throw from New Britain stadium. Walking in, I was reminded of my own baseball past -- spaghetti dinners at the White Bear Lake VFW, with the veterans wanting to see what their $500 uniform sponsorship had purchased that season, and post-season American Legion awards banquets held in the basement of the Roseville American Legion. 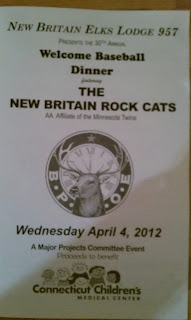 This welcome home dinner felt substantially similar. We were in the basement of the lodge. It was warm, and the decor was old, as were some of the Elks in attendance. There were all sorts of fans there, including tons of kids, which was great. And most importantly, every player on the Rock Cats' roster was in attendance. And I'll say this: the Twins organization does a fantastic job of making sure that each and every player coming up through the system -- even those from the Dominican Republic that hardly speak a word of English -- does their very best to be polite and considerate to all fans. I saw a couple dozen kids walking around with baseballs signed by literally every player on the roster.

The Miller Lite was flowing. A beer at the Elks Lodge cost just a fraction of what it will cost tonight at the stadium for the opener, and was hardly more than the cost of buying beer at a liquor store. When I walked in, some of the players (all wearing name tags) were talking with each other near the bar. I'm sure some of them had not participated in too many of these events. And as I learned later, many were just getting to know each other.

At this dinner, one player sat at every table. The previous evening, I had told my brother-in-law that, if I got to choose one player to sit with us, it would be Alex Wimmers. I think he's interesting, and has great potential. You have to like the fact that, although he suffered great difficulties early last season, he came back and threw a no-hitter in his final start of 2011. Clearly, the Twins are high on Wimmers, because they promoted him to AA after only 40 innings in Ft. Myers. After we all sat down for dinner, Jeff Dooley, the voice of the Rock Cats, introduced the roster one-by-one, and assigned each player to a table. To my surprise, Wimmers was assigned to our table.

For three hours, talking to 6 adults and a 10 year-old kid across the table, Wimmers was awesome. He answered a lot of questions, initiated conversation on a bunch of different topics, and was especially cool with the little kid. We learned a lot of stuff. First, Wimmers had only been in Connecticut for a couple days, and had just found an apartment to rent (with 3 other players) that same day. He didn't have transportation to and from this event -- he didn't even know how he was getting home when the dinner ended! Like some others, he had shipped his car up from Ft. Myers, and it wasn't scheduled to arrive for a couple more days.

He talked a lot about coming up through the system. Wimmers really looks up to Joe Mauer. It almost sounded like hyperbole, but he talked about Mauer's work ethic and how all the younger guys learn a lot from Mauer just by being around him during drills and stuff. Wimmers said he got to pitch to Mauer one time in a spring game, and that it was pretty cool. Wimmers definitely believes he's on the fast track. According to Wimmers, Terry Ryan impressed on the AA crew that top performers will not necessarily have to stop in Rochester. Although that's the normal course of events, Ryan has made these guys believe that they are close to the show. Wimmers knows he has a lot to prove this season, and he looked like a guy ready to go to work. He was confident without being arrogant.

Wimmers also talked about the daily schedule. I once attended a baseball camp where the coaching staff called pitchers "non-athletes." Sort of jokingly, sort of not. Wimmers is an athlete. On his 4 non-pitching days, the physical routine is rigorous. Lots of lifting, running, stretching and throwing. No down time. And he looked the part. Having seen Scott Baker, Carl Pavano and a few other pitchers in person, Wimmers is in considerably better physical shape. He's pretty ripped, in fact.

The biggest thing, however, that I took out of my evening with Wimmers is that he's a young man pretty far away from home in Ohio. He's a Cincinnati Reds fan (and a Twins fan, of course). He's far away from his parents, who won't be in attendance at Rock Cats games. It sounds like he comes from a normal family. To Wimmers, his new family -- the Rock Cats -- is largely a cast of unknowns. Yes, he knows some of them from Spring Training, but others are strangers. He's living in a state he knows nothing about, working in a city that is not an especially fun place to hang out, and staying with 3 other pitchers in an apartment that's not even close to his place of work. It's an interesting life.

For a guy that signed a $1.332 million bonus to join the organization, Wimmers was down to earth. It's interesting to see both sides of the guy: the competitor that's confident that he has what it takes to make the show sooner rather than later; and the guy who was up at 6:30 that same morning trying to find a crappy apartment to share with three other players for the foreseeable future. And I bet the fans at other tables would tell you the same thing about their player, and so would the fans from the Beloit Snappers banquet and the Rochester Red Wings dinner.

The minor league baseball experience is real. It's visceral. Tonight, it smelled like an Elks Lodge basement. It's guys driving old cars to the stadium, players living together in strange apartment complexes in strange towns. It's playing double-headers to crowds of 2,000. It's signing autographs for kids that, in 2 days, might have completely forgotten who you are, or will use that same baseball that you autographed to play catch. It's having to attend fan banquets and lunches at Elks Lodges when you would rather be out partying or sleeping. Still, though, it was a pretty cool moment when Jeff Dooley mentioned that Mauer, Justin Morneau, David Ortiz, Torii Hunter, Scott Baker and Glen Perkins had all attended this event. The history and promise of it all -- that might be the best part of minor league baseball.

Tonight at New Britain Stadium the process starts anew. Wimmers is set to start Monday's game. As we were leaving, I told him that I hope he dominates, and that he's not in Connecticut for very long. Wimmers is smart -- he knows the potential vacancies with the Scott Baker, Francisco Liriano and Carl Pavano contracts expiring. He knows that Jason Marquis is probably a one-year deal. And he knows that Kyle Gibson is no longer on the fast track that he was just a year ago. In the Twins' system, there is room for good, young pitching. Hopefully Wimmers can put together a solid season, and be in Rochester -- or even Target Field -- sooner, rather than later.


I went into this event expecting roast beef and a fun time. I ended up with roast beef, a fun time and a chance to sit at a table with a guy who might, by 2014, have locked down a spot in the Twins' starting rotation.