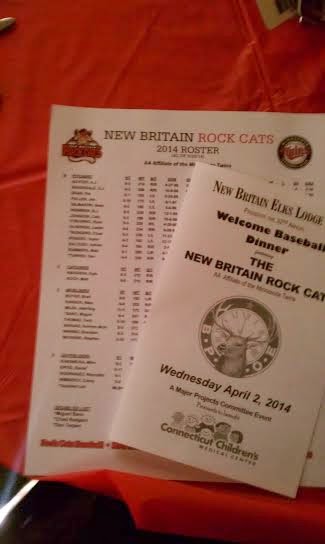 The Rock Cats' Annual Welcome Home Dinner is one of my favorite events of the season. It's the first time the year's squad is assembled, it's a fun & truly minor league style event, and it never gets old watching the guys sign autographs for excited kids. This is my third such dinner. In 2012, Alex Wimmers sat at my table. Last spring, it was Jason Christian. Both have had, well, let's call it less than good luck since. Tonight it was D.J. Baxendale, the 23 year old Arkansas native who dominated the first half of 2013 in Ft. Myers, but struggled with the transition to AA. I'm looking for him to step up and lead the rotation this season.

I could go up and down the roster for you, but you can read that stuff elsewhere (and I can get another post out of that later). What's most interesting to me about this dinner -- and what I want to touch on -- is the moment of transition that we, the fans, catch the guys in at this point every year. Baxendale, for instance, was still in the process of figuring out his living arrangements. In fact, the team had just arrived in Connecticut on Monday (after a scrimmage Monday morning -- no time is wasted in Spring Training), with an off-day Tuesday to take care of rentals. A lot of the guys have cars shipped up from Florida. Well, most of the cars haven't arrived yet. So there they are, many seeing New Britain for the first time, with just a day or two to find lodging before the season -- and the grind -- starts. Sure, they're adults. But the older I get, the more they look like really large kids. Playing pro baseball is definitely a dream come true for each one of these guys, but it doesn't come without a bunch of sacrifices. Chief among them: certainty.

I also wanted to touch on the professionalism. I've said it before, but it's true: the Twins do a very good job, up and down the organization, of teaching their players to be respectful and friendly to fans. Believe me -- not every organization in baseball acts this way. The guys all signed autographs before the dinner, during, and even after as they were leaving. I watched them goof around with kids who were elated to be sitting next to pro ballplayers. Nate Hanson and A.J. Achter come to mind this year. By all accounts, both should have started the season in AAA, and I'm sure they are upset to be back in New Britain. Hanson, for instance, has been a Rock Cats player since the summer of 2011 (excepting 20 games in Rochester last season). I mean, the guy could be 3 years into a mortgage on a nice little piece of land in Connecticut. But there he was, saying hi to the people he recognized, signing autographs, and (on the surface) ignoring the fact that this was his third such dinner in New Britain.

I think this year's team will be solid. Yes, Buxton and Vargas need to drive the offense. But I'm looking forward to watching some quality pitching this season. I sense some good, low-scoring games in 2015.

Finally, I won a nice hooded sweatshirt. So it was a good night.
Posted by Andrew at 10:44 PM