The Twins are in a sort of interesting position when it comes to Joel Zumaya. Somewhat unsurprisingly, the firethrowing righty didn't make it past one of his first batting practice sessions last week, and now needs decide whether, at age 27, to retire and become a professional fisherman (apparently he is enough of a realist to understand that becoming a professional on Guitar Hero was not going to happen), or to opt for Tommy John surgery and attempt another comeback. 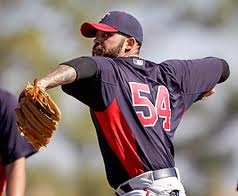 Technically, Zumaya is still in the Twins' fold. I still think it was a good move signing him, and the $400,000 is negligible in the grand scheme of things. We can debate whether the Twins should have had a back-up option with solid MLB experience, but that's for another day. Although Zumaya is a young, successful millionaire, like the rest of professional athletes, I do feel bad for the guy: he has had so many surgeries, and adding Tommy John to the list reportedly would be his 6th surgical procedure in as many years. You can understand why he might want to hang up the cleats in exchange for a nice Ranger boat and a pair of those oversized sunglasses.

But there might be more to the story. What if Zumaya has Tommy John surgery next week? According to one source, the average recovery time from surgery to full competition mode is 11.6 months. That sounds about right. That would put Zumaya out for the 2012 season, of course, but capable of pitching in 2013. Could Terry Ryan and company help convince Zumaya to have the surgery, keep him off the 40 man roster for the year, and offer a similar, low-risk high-reward contract for 2013?

I think it's at least worth considering. If there's one thing the Twins' training staff has recent experience in, it's helping pitchers rebound from Tommy John surgery (see Nathan, Joe; Liriano, Francisco; Neshek, Pat). Of course, such a proposition -- especially with Zumaya -- has a good chance of turning into an annual Charlie-Brown-getting-the-football-yanked-by-Lucy-as-he-goes-to-kick-it sort of thing, but even next year, this team would still have use for a guy that can throw 100 mph (note to Twins: explain to Zumaya that he will be expected to throw more than 13 pitches this time around).

In the end, it might make more sense from Zumaya's perspective to simply retire. I'm sure it is mentally exhausting for both he and his family to go through all these medical issues each and every year. But on the other hand, Zumaya still could be a great -- and dirt cheap -- pickup for the Twins. He's like an unscratched $1 lottery ticket with 1 in 100 odds. How many times do purchase a ticket, and not win, before you give up on the game?

What do you think? Assume for right now that Zumaya is undecided on retirement. Do you try to convince him to get the surgery and come back to the Twins next year for close to league minimum, or do you cut ties now and wish him good luck?
Posted by Andrew at 8:26 AM