Chris Parmelee should be fine. He looked great last September in a Twins uniform, and was a bright spot during an otherwise dismal time. Of the three prospects called up -- Parmelee, Joe Benson and Liam Hendriks -- Parmelee looked the most ready for the show. After watching several Rock Cats games last year in person, I was a little surprised that Parmelee, and not Benson, looked better in his time as a Twin, but that is why I don't get paid to do anything baseball related. You can call it a small sample size, and you'd be correct, but for 21 games in a Twins uniform, Parmelee had a .355/.443/.592 slash line with 4 home runs and 18 RBIs, and most importantly, didn't looked overmatched at the plate or in the field. He also just looked comfortable playing in the majors, which some call-ups are not. And to Parmelee's credit, he followed up his September cup of coffee with a nice glass of Florida orange juice. His numbers aren't quite as impressive, but with a .269 average, 3 home runs and 9 RBIs, he at least has demonstrated that the power he exhibited last September wasn't necessarily a fluke. 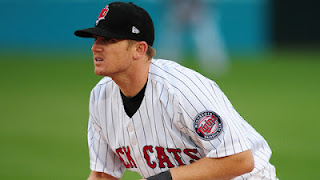 With Morneau presumably starting the season as the full-time designated hitter, and with Parmelee's success, Parmelee is the odds-on favorite to start the season at first base. Understandably, once fans got past the news that Morneau will now be a professional hitter, many are excited by Parmelee's potential. In fact, there have been a few blog posts, and even newspaper articles, suggesting that Parmelee might be the next big thing for the Twins. I just don't think that we should get ahead of ourselves. There's likely going to be a big difference between what Parmelee can provide at the plate over the course of a full season in the majors -- seeing pitchers and ballparks for the first time, and becoming accustomed to the rigorous travel schedule and time demands -- and what he demonstrated in New Britain and Minnesota in 2011, and in a few weeks of exhibition games in 2012. I think Parmelee will be a success, both this year and the future, but I also think that in 2012 he will much more closely resemble the player that hit a composite .282 at New Britain than the player that took Target Field by storm last September. As fans, we should be fine with that.

Parmelee, who turned 24 last month, is a rookie in the truest sense, without even a game of AAA baseball under his belt. Though he has looked fairly consistent, be ready for slumps, and expect -- at least occasionally -- for him to look overmatched at the plate. It's been a while since the Twins had an exciting rookie prospect come up that both management and fans expected to have a good career (I won't even mention Wilson Ramos; and Danny Valencia, though he did well in 2010, by no means shot up through the minor league system and never batted at or above .300 in AA or AAA). In 2005, Justin Morneau's first season as a full-time first baseman, he batted .239/.304/.437 with 22 home runs, 79 RBIs and 94 strikeouts. The power was there, clearly, but he was still a little raw. The next season he was the American League Most Valuable Player. During his nacency, Morneau was also rated the #14 and #16 prospect by Baseball America. Parmelee, conversely, did not come up through the system with such expectations attached to him. Here's what I expect from Parmelee, assuming just for now that he is a full-time starter (though likely he will be splitting time at first with Joe Mauer, Ryan Doumit and perhaps Morneau): .270/.345/.440, with 18 home runs and 70 RBIs. And I expect the defense to be solid, but not astounding.

Yes, Parmelee is ready to play in Minnesota. And yes, he looks like a really solid first base prospect with perhaps an exciting future ahead of him. But there's a jump between AA, a September call-up and Spring Training exhibition games, and perhaps having to face CC Sabathia one night, and Justin Verlander or Cliff Lee the next night. The good thing, though, is that Parmelee has looked like a professional this spring, and I have little doubt that he is the type of player that will make the adjustments necessary for long-term success.
Posted by Andrew at 9:24 AM