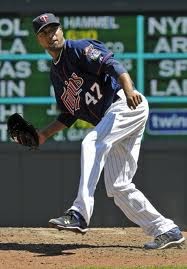 In the end, Francisco Liriano's pitching line yesterday looked fine on paper. He gave up no runs, walked one, and struck out two, in two innings. Still, though, even though this was his first start of the spring, I was left wanting a little bit more. The frustrating aspect of Liriano's outing, for me, was that 12 of his 25 pitches were balls. In the first inning, Liriano fell behind all three hitters, Dustin Pedroia, Jacoby Ellsbury and Cody Ross. Pedroia walked, but Liriano got Ellsbury to line into an unassisted double play at first, and struck out Ross on a nasty slider. The best aspect of the outing, though, was that Liriano settled down thereafter, and he averaged 12.5 pitches per inning. We all know that Liriano is much more effective if he doesn't get that pitch count up to 40+ after the first couple innings.

I don't want to make too much out of Liriano's performance: it was his first outing; it's Spring Training; and he did not give up any runs. And the slider looked very good. But as usual with Liriano, I'm left wanting a bit more. I want to see him attack the strike zone early in the count. I've harped on Liriano and first pitch strikes before, and it probably has become an obsession with me. So forgive my indulgence. But I really do think it's one of the few things separating Liriano from taking that next step in his career (and, generally, just having better control overall). Call me crazy, but I think that veteran hitters like Dustin Pedroia are going up to bat in the first game of Spring Training looking to see some pitches, have good at-bats, and get their timing down. So Francisco, go ahead and throw a 90 MPH fastball on the outer half just to get ahead in the count!

I thought Ben Revere looked good. I may be wrong, but in the three at-bats I saw him take, I don't recall him swinging at a first pitch. That's a good sign for a hitter that hopefully will someday become capable of taking on a leadoff role, and for a hitter that, last year, swung at a lot of first pitches, and needs to increase his on-base percentage. He was speedy on the basepaths, stealing second with ease in the first inning. Unfortunately, though, he was picked off of first base later in the game, thus negating, more or less, the stolen base. It's hard to complain, though, with a 2-4 day at the plate, a stolen base, and 2 RBIs.

Finally, there was a scary moment, when Ray Chang slid into second base and appeared to hit his head on the leg or knee of the shortstop. If you haven't seen the play, you don't have to watch it: it looked very much like Justin Morneau's July, 2010 slide that caused his infamous concussion. Here's hoping that Chang feels fine today when he wakes up. For what it's worth, Chang was having a good game, going 1-1 with 2 walks (both on full counts) and a stolen base, and looking good at second base. I don't know if he's our second baseman of the future, but I did like what I saw of him last season in New Britain.

Thanks to my east coast proximity, I will be enjoying at least part of tonight's Twins-Red Sox game on NESN, and will be back with a report tomorrow.
Posted by Andrew at 8:22 AM