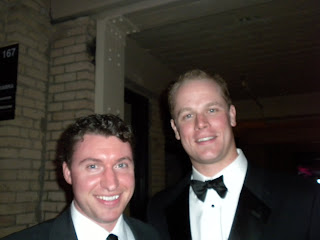 Last weekend marked my annual summer trip to Minnesota. This was an abbreviated trip, in part due to work stuff and in part due to other travels we recently have made. Not that I was regretting the idea of a game at Target Field, but three weeks ago I was less than enthused about the team, for obvious reasons. Then, things started changing. Pitchers began throwing deeper into games; Michael Cuddyer began hitting for average and power; and a duo of small, fast guys, Alexi Casilla and Ben Revere, have helped ignite the offense. Well, on Saturday that's exactly what we got.
Scott Baker was deali 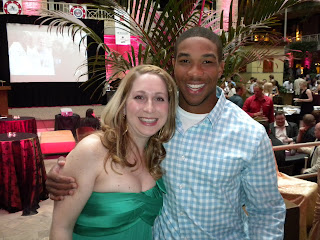 ng. He was dominant, not allowing a hit until the 5th inning. He embarrassed Josh Hamilton three times, including coming back from a 3-0 count to strike him out, for the third time. His fastball simply looked great, and he kept it down. The play of the game, unquestionably, and arguably the play of the year for the 2011 Twins so far, was Ben Revere's full-out diving catch in left-center field. We had a great view of it, and it was the best defensive play I have seen in person. In short, the AAA Twins lineup ran, hit, and fielded their positions, power threats Cuddyer and Delmon young each hit doubles, and Scott Baker game us the opportunity to win a game. It was a wonderful afternoon of outdoor baseball at Target Field.

Sunday, my wife and I had the opportunity to attend the 2011 Justin Morneau Casino Night, held at International Market Square. I had wanted to go last year, but the timing didn't work out. It was a blast. Admittedly, it was a little expensive, but, comparatively, I would give up attending 1 or 2 games during the year to go to something like this. Also, the purpose of the event was to raise money and awareness for juvenile arthritis. Now of course everyone knows what arthritis is, but few are aware that thousands of children suffer its debilitating effects. Just like any other disease or disorder, it is much m 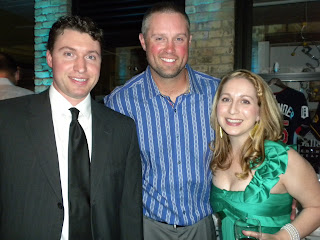 ore tragic when it afflicts children. We were more than happy to donate money to this worthy cause, which is close to the hearts of Justin and Krista Morneau.

Most of the "starting 9" were in attendance, including Cuddyer, Casilla, Young, Denard Span, Jason Kubel, Jim Thome, Nick Blackburn, Scott Baker, Danny Valencia, and of course Justin Morneau. I also suspect some of the recent Rochester call-ups were there, as well, but I have to admit I wouldn't recognize Brian Dinkelman without a uniform on. The players were fantastic, and allowed fans to take pictures with them. We had a short conversation with Ben Revere about his catch. "I closed my eyes, honestly. I closed them real hard," he said. He was extremely friendly. I don't think he was immediately recognized by many.

I also had a nice short conversation with Michael Cuddyer about his articles for foxsportsnorth.com, which I have found to be entertaining and informative, for the most part. Delmon Young was quiet but friendly, as was Jason Kubel. The highlight, though, was talking with Justin Morneau. Last season when the Twins played in Baltimore, we had high hopes of having him sign a banner from the Metrodome (in his likeness, of course) that I bought at the Twins Pro Shop. Unfortunately, he had suffered the concussion and didn't make the road trip. We met several of his Canadian friends from childhood, though, who were at Camden Yards for a bachelor party funded by -- you guessed it, Justin Morneau. We had a great conversation with these guys last year, and that provided a talking point when we ran into Justin waiting in line for a beer. He was extremely friendly and talkative, despite the fact that he had been approached probably 200 times that night. All in all, it was a great Twins-themed weekend. It was neat seeing the players off the field. They were all pretty good guys. It's easy to think and write negative things about them, especially when the team is horrible, but if you do that, it's only fair to write that most of the guys are fantastic when it comes to charity work. They certainly did not disappoint. 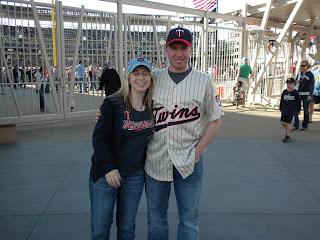