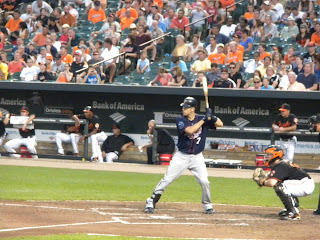 Well, here I go again. I couldn't help myself. I guess a byproduct of the Twins having an abysmal year was that I started keeping track, tongue-in-cheek (mostly), of a meaningless stat between 2 players that don't have much in common, apart from the fact that they were both top catching prospects and are expected to be great for several years to come. As you may recall, I charted the progress of Yankees' Jesus Montero as he caught, then passed, Joe Mauer for home runs on the season, in just a handful of at-bats. What can I do now that the Twins' season has ended, but the Yankees are still playing?

Naturally, I can look at postseason RBIs, a somewhat meaningless statistic, especially given the fact that runs have been at a premium for the Twins teams that have competed in Octobers past. Without further ado, here is the Jesus vs. Baby Jesus (thanks for the catchy title, Seth!) postseason RBI comparison: In 35 postseason at-bats, Mauer has 1 RBI. For what it's worth, his slash line is not bad, but it is not especially good: .286/.359/314. He has one extra base hit -- a double -- in his postseason career. This suggests that, although Mauer is hitting singles at an acceptable rate, and is drawing some walks (4 in his playoff career), either no one is on base when he hits, or he is not getting the runners in, by getting big hits, when it counts. Montero, on the other hand, just got his first taste of playoff baseball last night, where he was 2-for-2 off the bench, and recorded his first postseason RBI in his first postseason at-bat. So as it stands today, Mauer and Montero are tied in postseason RBIs, and Montero tied Mauer in 1 at-bat. Depending on the lineups for tomorrow's Game 5 against the Tigers, where presumably Joe Girardi will put everything on the table, Montero might see more action, and might have a chance to leap ahead of Mauer. I promise to keep you posted.

In all seriousness, though, this has been an interesting last 24 hours in Twins Territory. Joe C. at the Star Tribune had a good recap of a season ticket holders conference call with Bill Smith, where, apparently, Smith was pretty candid about the 2011 shortcomings, including awful production at the shortstop position, and Nishioka's future (personally I think his future is not on this continent). It's a step in the right direction, anyway, but I want to see this organization move quickly once the World Series ends.
Posted by Andrew at 1:31 PM