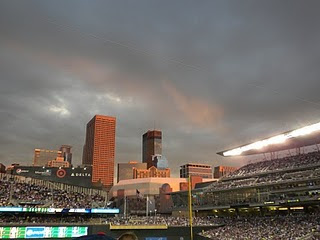 From my perspective as a Minnesota outsider, I would still welcome the opportunity to go to most any Twins game at Target Field. Even if the weather is going to be unseasonably cold or hot, or if heavy rain is forecasted, I would still make the trip to Minneapolis in order to go to Target Field. I've been only twice - - once each season - - and I sat in generally the same area down the left field line, so there is still about 90 percent of the ballpark I haven't really experienced. I've never been to the upper parts of the stadium; to Hrbek's; to the Champion's Club; and have never sat in the home run porch or the right field overhang. For me, there's still lots to see. Even if the 2012 Twins play like the 2011 Twins, I would still eagerly go to Target Field, if not to watch the players, then to experience the ballpark.


I expect that I might be in the minority. Most Minnesotans who are interested in Target Field have probably been there by now. To be sure, if they were initially turned off by the high ticket prices and sell-out crowds, then this September probably provided them the best opportunity for bargain baseball. The last week of the season certainly saw plenty of empty seats, and you could get tickets on Stubhub.com for literally pennies on the dollar.

The Twins took out a full-page ad in the Star Tribune, promising to rally in 2012, and indicating that, although injuries played a role in the 2011 failure, the 2011 awfulness and disappointment would "motivate [the club] to a better 2012." I want to believe that. But then you read LaVelle E. Neal's interview with Jim Pohlad, which really sends mixed signals. On the one hand, Pohlad said that there were significant holes in the lineup, and that the Twins would be using the free agent market to sign one or more talented players (I assume, and hope, that signing one or more of Michael Cuddyer or Jason Kubel is not what Pohlad was referring to; I'm interested in talent outside the organization). On the other hand, Pohlad notes that the Twins are not a "knee-jerk organization," and that Bill Smith's job, in particular, is safe. Don't get me wrong: I didn't expect Bill Smith to be fired. But it wouldn't have disappointed me.

Look at what is happening in Boston (certainly the definition of a knee-jerk organization): Terry Francona, the man who broke the Red Sox' World Series curse and actually won it for them twice, and who got the team to the playoffs more often than not, was dismissed (or quit, or some combination thereof) because his players had an awful month. And the rumors are that GM Theo Epstein may be on his way out, as well. I'm not looking for the Twins to go this route, but if significant acquisitions are not made over the next few months, if the manner in which the team analyzes and scouts player attributes does not soon join the 21st century, and if the team has another clunker year, yes, I do want Bill Smith dismissed. That's what happens in the business of baseball, regardless of whether the organization is knee-jerk.

This brings me, finally, to my question: Is the "new car smell" at Target Field gone? Short answer: Not yet. There is still a waiting list for season tickets, and although I have read reports that several people are not renewing their ticket plans, I do not doubt that many of the 3,000-plus people on the waiting list will still want seats. Unfortunately, all the Twins have to do to sell out Target Field next year is have a respectable product on the field. They don't even need to win the division. For Twins fans that have been to Target Field plenty of times, however, it might be a different story. If the new car smell is not yet gone for them, I suspect that, perhaps, Target Field and the expensive tickets might be analogized to a brand new car that has been in a moderate accident, and, unless it is perfectly repaired, might never feel quite like it did off the showroom floor. So, although it might still smell new, it's tainted.

The Twins have the ability to turn things around in 2012. Aside from having healthy players, the front office needs to shore up the middle infield (through an acquisition, not through promotion); the bullpen needs to again be re-vamped; and something in the way of starting pitching needs to take place. I have read several times that not many good starting pitchers will be available, but CJ Wilson and Mark Buherle top the list. Why couldn't the Twins out-bid other organizations for Wilson? Sure, he's not Cliff Lee, but he's much better than any other option we have. In fact, the savings from not re-signing Kubel, and declining Joe Nathan's option (and thereafter negotiating a lower salary), could go a long way toward paying a top-of-the-rotation starter. I'm not saying that CJ Wilson needs to happen; I'm only suggeseting that an argument that the Twins cannot acquire a high-profile free agent for 2012 is patently false.

Taking out a page in the Star Tribune to apologize for the awful season was a good first step in acknowledging that things can't remain the same for the Twins. It was a nice gesture. As my good friend pointed out, though, perhaps Twins' fans would have been best served if the thousands of dollars spent on a full-page ad had just gone straight to payroll for a free agent acquisition. As always, actions speak louder than words.
Posted by Andrew at 9:50 AM