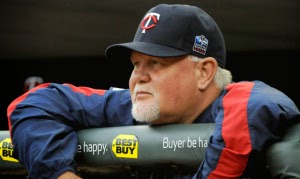 If you follow me on Twitter, you probably know that something clicked -- something changed -- last night. The most thorough and comprehensive Twins beat writer, Mike Berardino, tweeted a series of quotes from Twins' manager Ron Gardenhire on player injuries. And it set me off. In fact, it might be fair to say that I freaked out. I tweeted a bunch of things, but decided to wait a full 24 hours to write comprehensively on this.

In that interim period, Mike published Gardy's full quotes. That's good and fair. Anyone can look really smart, or really stupid, in 140 characters. And I know that Gardy isn't stupid. He's been a ... good baseball manager on some very good teams. In fact, he did a very good job some years. I've never disliked the guy personally, but based solely -- yes, solely -- on his comments regarding pitcher injuries yesterday, he's gotta go.

I have to qualify what follows with a bunch of important factors. Please read these, because they are really important:

1) It is the player's responsibility to report injuries. There's no way trainers/coaches/manger can intuit that, absent glaring injuries that are visually apparent.
2) A manager does not have the time for or need a line of guys complaining every day about routine soreness. It's a long season and that's the way it works. Guys have to play through general soreness/routine injuries. They're premiere, professional athletes, and get paid as if they only will have a short career. Tough luck.
3) A team cannot control whether a player lies or covers for an injury. That team can observe and inquire, repeatedly, but that's about it until a medical exam is ordered.
4) This isn't about winning and losing, really. Firing Gardy won't cost this team wins or losses this year or next. And even if it does, the 2014 Twins were -- at best and fully healthy -- a .500 team. Few call Gardy a great "in-game" manager (like Joe Maddon is generally considered to be), but he's been dealt awful teams from 2011-now. Remember when Chris Parmelee played center field? Oh yea, that was last week. And it happened multiple times. Chris. Parmelee.

But here's where it gets serious:
5) Soreness/injuries to starting pitchers are no joke, and Tommy John surgeries are taking place in record numbers.
6) The Twins have had their fair share -- probably more -- of Tommy John victims. It costs a season of activity, and really more than that, because very few guys come back ready to go. Many never return to their former ability. Jeez, it even affects non-pitchers like Miguel Sano. It's an epidemic right now.
7) The Twins have had the among the worst pitching rotations in baseball much of 2011, 2012, and 2013. And although the 2014 rotation has been bolstered by good half-seasons from Phil Hughes and Kyle Gibson, and a decent performance from Kevin Correia, this is far from an "elite" starting corps.
8) Great starting pitching costs tons of money on the open market. For a true "ace," $20-30 million per season. Good starting pitching is in the double millions of digits. It's a hot commodity -- and I can see why: the teams that go far in the playoffs have 3, and sometimes 4, very good pitchers.

Now, let's get to the issue at hand. To begin, Ricky Nolasco has been awful this season. One of the worst starting pitchers in baseball. He's not missing bats, and he's given up the most hits in baseball. Why the hell would the Twins sign that guy to a 4 year, $49 million contract? Simple -- because he had been a good pitcher, and he was about to move to a pitchers' park. But he's not good now, and he struggled most of the season. That's not Gardy's fault. Nor is it his fault that Nolasco did not come forward timely with that injury information. But here's the exchange between Mike Berardino and Gardy that put me over the top:

Mike: "At this point I asked a follow-up about whether Gardenhire wants his pitchers to inform him and team trainers when they are dealing with something health-wise."


Gardy: "If every pitcher told me every day when they were feeling something, they would all be lined up out that door. You understand? Guys pitch with it. We play every day. You can’t just say, ‘Well, he was sore. How did you not know that then?’ Shoot, I don’t know what they do. I don’t know when they go to the bathroom. I don’t know anything about them out there. Other than if they walk in here or the trainer walks in here and they say, `I can’t play.’"


This is where I lose it (not the part where he doesn't know when pitchers go to the bathroom). The part where the Twins' manager indicated that he (as Mike himself paraphrased), didn't want to be notified about injuries until they reached a certain level.

More precisely, there's something in-between a pitcher "feeling something" and a pitcher saying "I can't play." A big something. A something that a manger needs to be aware of firsthand.


In this instance with Nolasco, thankfully, it appears that his injury is not significant -- nothing that should require surgery. But Nolasco's fortunate medical outcome has no bearing on the larger point.


Here's where the rubber hits the road for me: if I'm a manger at any level of professional baseball, I need to know about my starting pitchers that are experiencing pain when they throw. It doesn't matter if it's mild discomfort or serious elbow pain. Anything more than "normal-in-between-starts-midseason pain" needs to be reported to me all season long, on a daily basis, even if it's a nuisance at times. In fact, I'll go a step further. If I'm Gardy, I want that same information on top prospects like Alex Meyer and Trevor May, guys who should be pitching at Target Field this August.


The fact that Gardy has the same attitude with respect to position player soreness as he does with pitching injuries is inexcusable in 2014. If we've learned anything, it's that pitchers generally shouldn't pitch through more than "normal" discomfort. Newsflash -- it always ends bad! And if -- and I mean "if," because no one reading this article knows firsthand -- there is a culture in the Twins' clubhouse promoting this attitude of pitchers throwing with more-than-normal discomfort, that also is inexcusable in 2014. So the problem isn't just player-related (that the athlete may not want to disclose an injury), it's also that the manager apparently is not receptive to hearing this news unless it reaches a certain level of severity. The "player" issue cannot be fixed overnight. The manager issue can. And the "manager issue" may very well be related to the "player issue" in this organization.


I'm not accusing Gardy of causing past or present pitching injuries. I'm not accusing him of being insensitive to injuries -- to his credit, he protected guys like Justin Morneau and Joe Mauer concerning their concussion issues (a relatively recent epidemic that some still don't understand the severity of) -- and I'm not accusing him of being an awful manager. I'm saying that it's 2014, we know more, and the Twins need better. If I was Terry Ryan, I wouldn't fire Gardy now. This team is going nowhere. And this will just set up a new manager to go 25-45 down the stretch. I would, however, terminate Gardy's contract following this season and let a new manager (Paul Molitor, someone else) take over fresh starting immediately after the World Series.
Posted by Andrew at 11:56 PM