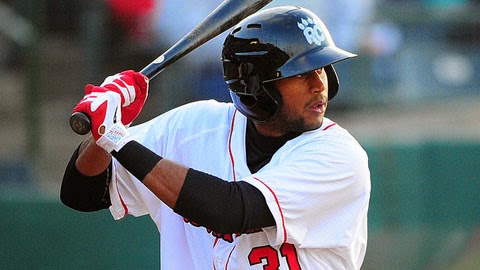 Spring turned to summer a couple weeks ago here in Connecticut. We're beginning a stretch of 90 degree weather and high humidity. Over the past couple weeks, the Rock Cats played great baseball, winning a franchise record 11 in a row. As you would expect, pretty much everything was clicking -- timely hitting, solid pitching, and it certainly didn't hurt that Eddie Rosario were getting comfortable with regular game action.

But, then, as happens in baseball, things caught up with New Britain. Tonight's loss made it 6 straight losses for the Rock Cats. Over those 6 losses, the Rock Cats scored a combined 10 runs -- just 1.66 runs a game. By contrast, in the 11 consecutive wins New Britain scored 73 runs -- over 6.5 runs a game.

I was at most of tonight's game, and what I saw was tired, tardy at-bats, and very few hard-hit balls. Kennys Vargas has struggled lately. He looked sluggish. Over his last 10 games, he's hitting a mere .147/.256/.147 with no extra base hits and no RBIs. Aaron Hicks, looking to get things together -- and apparently now trying to switch hit again -- has hit a disappointing .143/.342/.286 with 4 hits in his last 10 games. A bright spot, though, is that he has 9 walks in that period. Eddie Rosario -- not any better. .105/.150/.105. 4 hits, none for extra bases. Just to generalize about these guys tonight: off-balance swings, fooled on breaking pitches. With those guys occupying 3 of the top 4 spots in the lineup and absolutely failing to produce, it's tough for the rest of the lineup -- generally regarded as non-prospects -- to produce.

Tonight's bright spot, and really a bright spot on the entire season, was Reynaldo Rodriguez. He hit his 13th and 14th home runs this evening, and is hitting a very solid .305 on the season. If you're asking who this stud is and why I don't talk or tweet about him very often, don't get too excited: he's 28 with limited defensive ability. But still, it's no reason to root against the guy, and he's shown marked improvement over last season, when he hit .231/.305/.482.

Going into the evening, I was most excited to see Taylor Rogers pitch. His start wasn't bad by any means, but it was one of his weaker starts in an otherwise great season. He made it 6 and 2/3 innings, but gave up 4 runs, striking out 3 and walking 2. He was stretched out to 106 pitches, which is good to see as we hit July. Aside from the rare strikeout, he didn't miss bats, and, generally speaking, the contact, even many of the outs, was pretty hard tonight.

What's the end result? Well, the minor league season is long. No planes, small apartments, bad food, low pay. Add in really hot weather and a long stretch of ballgames, and every team is bound to have ups and downs. Now, however, would be a good time for the guys we expect to be in the majors next year (Vargas & Rosario for sure, and hopefully Hicks) to show a little leadership for the rest of the team.
Posted by Andrew at 11:53 PM