Mr. Pohlad, Tear Down That Wall!

Joe Christensen over at the Star Tribune has an interesting piece discussing the Mauer contract, its scope in terms of the Twins' payroll, and whether, in retrospect, it was good long-term idea for the Twins. In it, Christensen quotes Mauer as stating, regarding Target Field: "A lot of times, I was hitting balls to left field that would be out of other parks, and they were caught for outs." This, of course, is not news for anyone that watched Twins broadcasts in 2010. It felt like Mauer hit about 50 lineouts or flyouts that were within 5 or 10 feet of being home runs. Christensen also notes that Target Field was was the stingiest ballpark when it came to yielding home runs, surrendering only 52 Twins home runs, and 64 opponent home runs.

I am ordinarily not one that believes in pandering to players' demands. I would have really liked to see the batter's eye trees given a chance to mature, and I think that Michael Cuddyer overstepped his role in complaining, publicly, about the trees. The fence issue, to me, is another story. Mauer has not out-and-out complained about the fence, but reading between the lines, his comments clearly indicate that he would be a happier camper were the left field fence moved in 10 feet or so. Justin Morneau, as well as other players, have said as much.

In my opinion, this is no more than a business decision. The Twins are in the middle of a relatively short window of time in which certain players (e.g., Mauer, Morneau, Young, Valencia, Liriano) are either affordable, in their athletic prime, or both. With respect to finances, Mauer and Morneau alone will cost the Twins $226 million on their current contracts, and that does not take into account any new contract or contract extension for Morneau that would begin in 2014. That's nearly a quarter of a billion dollars for two players that have, in some manner, voiced concerns about Target Field's dimensions, and that certainly have experienced some degree of difficulty hitting for power there.

Additionally, the Twins as a franchise are becoming increasingly reliant on power, as it is not unreasonable to expect a minimum of 20 home runs from 5 of the 9 likely opening day starters (Mauer, Morneau, Young, Cuddyer, Thome/Kubel). This is a far cry from the teams composed primarily of scrappy piranhas and cagy, over-the-hill veterans of just a few years ago.

2010 was the first year playing at Target Field, and the sample size -- 81 regular season games, 2 preseason games against the Cardinals, and 2 postseason losses against the Yankees -- is probably a statistically insufficient basis upon which to make a decision about the playing field dimensions. After 2011, however, if Target Field remains the stingiest ballpark in all of baseball with respect to home runs, and if the Twins continue to court and sign to long-term deals supposed power hitters, the field dimensions should be altered.

And if the Twins do move up the left field fence, I would like nothing more than to see a St. Paul Saints-esque hot tub constructed in that new patch of vacant real estate. Can you imagine the revenue? 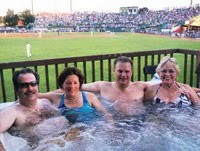