From the sound of it, Michael Cuddyer is done as a Twin. Terry Ryan and the organization moved in on Josh Willingham, presumably after getting tired of waiting to hear back from Cuddyer on the Twins' 3 year, $25 million (or so) offer. Cuddyer was/is seeking in the neighborhood of 3 years and $30 million, but understandably and logically, the Twins weren't willing to go there. It looks like, by jumping in and signing Willingham for 3 years and around $21 million, the Twins effectively cut off negotiations with Cuddyer and have made it easy for him to leave Minnesota while not having his reputation tarnished by being labeled as a player who had no loyalty to the team or who jumped ship when times got tough. Wherever Cuddyer goes, I wish him the best of luck. I thought that this might be an appropriate time to contemplate Cuddyer as a player and person, and to reflect on where this leaves the rest of the team.


It's always tough to lose your longest-tenured player, whether that comes via trade, free agency or retirement, so make no mistake, Cuddyer does leave a void to be filled, and not just out in right field. Joe Mauer, Justin Morneau, Denard Span, and maybe even a guy like Glen Perkins, are going to have to step up as leaders, and will need to be accountable to the media in the same way that Cuddyer was. And Danny Valencia, I'm looking at you specifically: it's time to grow up. It's not going to be sufficient for Mauer to duck reporters in 2012 and to leave others to clean up his mess. He needs to lead now, regardless of whether he's initially comfortable in that role. It quite simply comes with the contract and the "hometown hero" status that he cultivated in the mid-2000s.

Equally as important, who will do the magic tricks in the clubhouse from now on? I have no idea whether the Twins have any other amateur magicians on the roster. My guess is no, unless Bill Smith had more foresight than I thought. If not, we could use one of the supplemental draft picks gained by not signing Cuddyer and scout a player with that attribute. Just an idea.

And as far as Cuddyer's work in the community, though it has little bearing on the on-the-field product, it is noteworthy. Again, this is an area where other guys are going to need to step in. Fans like to think that players are just like the rest of us. Seeing them wait tables, serve drinks, sign autographs for kids and host charity events, goes a long way toward cultivating a brand of baseball in Minnesota that, I believe, is actually pretty great. Players here are simply much more approachable and nice than they are in most other cities I have visited -- especially New York and Boston (good luck getting within 100 feet of Derek Jeter; and watch when he then refuses to sign autographs for kids).

Cuddyer's power -- don't forget he lead the Twins in home runs in 2011 -- should be replicated nicely by Willingham. As will his RBI and slugging percentage totals. So that's a wash. In fact, Willingham may display more power than Cuddyer. But as far as versatility, Cuddyer has a leg up. No more do we have an outfielder that can fill in at second base or first base. But that's OK. Let's not forget that Cuddyer wasn't especially good in those positions, and that, if this team is really trying to compete for the playoffs, having an outfielder playing second base for an extended time period isn't a good sign. Further, we saw Mauer play a decent first base last year, and it sounds like Nishioka will be a utility infielder at least to start off 2012. Cuddyer's versatility and willingness to play anywhere, though laudable and necessary in years past, hopefully will not be missed much in 2012.

Double play ground balls, low-and-away sliders: Achilles heels of Michael Cuddyer. I have to admit that I won't be sad to not watch him flail helplessly at a slider in the dirt for strike three, with a runner on second and two outs. It's an image that has been repeated many times over the past several years. Sure, every player has holes in their swing, but this was a crater that was never patched up. And don't forget that Cuddyer started off miserably in 2011, threatening not to drive in a runner with a base hit until approximately June (it felt like). Granted, he really heated up in the middle of the season and had a respectable 2011, but boy, those first couple months were painful. I'm not sure exactly what to expect from Willingham (I know the batting average won't be sky high), but a consistent .270 with power would be all right by me.

Finally, it's worth noting that it sounds like Cuddyer might have wanted out of Minnesota. And that's his right. He has every reason to doubt that the Twins will be playing in a World Series during his playing days. Still, though, with the teams courting Cuddyer rumored to be the Rockies and the Mariners, it's not exactly as if he would be leaving for necessarily greener pastures. Sure, the 3 years and $24 million the Twins offered represented a yearly pay decrease for Cuddyer, and it was below the $30 million he had hoped to get, but at the same time, I have yet to read that a team has approached him with that kind of money. In the end, Cuddyer probably didn't accept an offer from the Twins that, I bet, will be within a couple million dollars annually of the offer that he finally does sign. Maybe he wanted out; maybe he thought he could get a couple million more out of the Twins. Who knows?

Although Cuddyer has ups and downs as a player, he seemed like a genuinely nice guy. And now he has new Twin girls to take care of, so he definitely has other things on his mind. I'll applaud him when he comes back to play against the Twins, or wherever else I might see him on the road, and I hope he has a productive few years before he retires. Thereafter, I'd love to see him come back to Minnesota as a radio or TV personality. Say what you will about Bert Blyleven, Roy Smalley, Ron Coomer and the rest, but Cuddyer would be just as good, if not better, than than anyone in that group. Good luck, Michael! 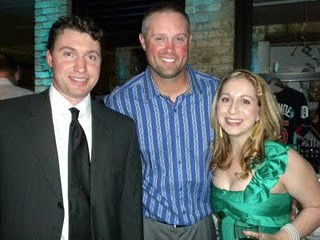