Charlie Walters of the Pioneer Press is reporting that the next installment of a statue at Target Field will be of former Twins' slugger Kent Hrbek. This makes sense. As Walters reports, Blyleven and Hrbek are the only players that have had their numbers retired by the Twins that have not yet been immortalized in a Target Field statue. The statue, to be located outside the entrance to Hrbek's own Gate 14, will, I imagine, be unveiled some time during the 2012 season.

This got me thinking: Tony O is set in stone with his distinctive swing; Rod Carew with that unique batting stance; Kirby with his Game 6 fist pump; The Killer with his explosive swing. So, what for Hrbek? There are some obvious choices: He had a memorable batting stance and a distinctive swing, both of which are entrenched in my mind. He played a great first base, and I remember several diving stops and picks in the dirt that he made to save what would have been hundreds of throwing errors over his career. Those, though, are the obvious choices. Here are a few others that come to mind:

How about the infamous Hrbek-Ron Gant play from the 1991 World Series. The Twins already immortalized it with the production of a bobblehead this past season that was extremely popular. Why not take it a step further? 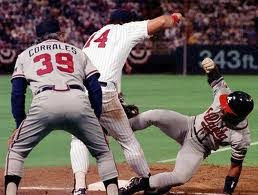 If the organization is going for a moment "later" in Hrbek's career, what about the divot he created at Target Field while diving for a ball in the old timer's game. Here's the video if you haven't watched it. It's glorious. I can just imagine a bronzed, lifesize Hrbek on his knees, staring helplessly at the small section of the Earth that his rotund, William Howard Taft-like frame has just destroyed. 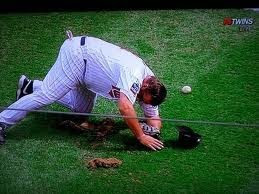 How about Kent partaking in this activity, which I'm sure he did both during his playing days and after his retirement? 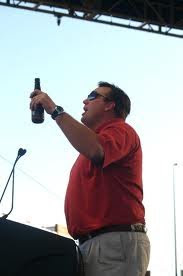 If I had to bet, though, here is my guess. Although I was only 6, the image of Hrbek jumping at first base after catching the final out of the 1987 World Series -- Minnesota's first -- is seared into my memory. This would be a great way to immortalize #14, as well as the 1987 Series. Kent, this is a well-deserved honor! If anyone has any other possible statue poses, I'd love to hear them. 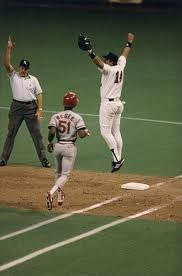