It's been reported that the Twins have a few upgrades in store for Target Field, with an eye on securing the 2014 All-Star Game. Certainly, I think it would be great for Minnesota to host the mid-summer classic for the first time since 1985, and would be an excellent opportunity to show off our new digs. In an effort to make their bid as strong as possible, the Twins plan to add more photos and displays, new carpeting and flooring, and improve both their wi-fi network and the ballpark food options. These sound like solid plans, but nothing very exciting. In fact, now that I think about it, these plans kind of mirror the 2011 Twins' off-season moves thus far: a couple things here and there, but nothing flashy or difference-making. If the Twins want to compete on the field in 2011, they are going to have to make some major moves; and if they really want the All-Star Game in 2014, we need to see dynamic changes to ensure that Target Field is as good as it possibly can be. My first suggestion would be to bring back those damn center field trees. But I digress. Today I want to discuss another option.

If you haven't yet seen the schematics or artist's renderings of the Miami Marlins' new ballpark, you should take a look. Personally, it's not quite my style, but I'm sure it will be a big hit in southern Florida. The park itself has many cool features, one of which is an aquarium. But it's not just any old aquarium -- this one is located in the backstop on either side of home plate -- where most teams simply have advertisements or green screens. The tank is going to be reinforced with some kind of super-thick Plexiglas to avoid the possibility of a batted or thrown ball shattering the aquarium, which will prevent thousands of parents from shielding their children's eyes as tropical fish flop helplessly in the on-deck circle on a 105 degree Miami afternoon. Here's the rendering: 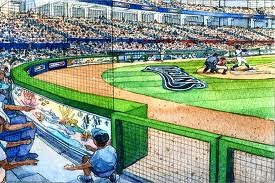 Although we don't have Marlins, rays or tropical fish in Minnesota, I think something can be taken from this and used at Target Field: Even though I don't live in Minnesota, I've read many articles about the Asian Carp infestation in Minnesota's lakes, including the severe and long-lasting damage that these fish do to the ecosystem. But, apart from trying to eat them (yuck!), is there perhaps another beneficial use to be had with this species? I think the answer is a resounding Yes.

And that's why I want to present to you my idea for an Asian Carp Aquarium at Target Field. It's a winner from all sides: It's "Minnesotan" as much as the Walleye on the menu, the Grain Belt beer, the limestone facade, and the soon-to-be Kent Hrbek statue. Moreover, an aquarium is a moving, attention-getting attraction, so if the 2012 Twins are as bad as the 2011 Twins, at least there's something to watch. Finally, rounding up as many of the carp as is feasible and putting them in one place is part of the solution to this environmental woe. 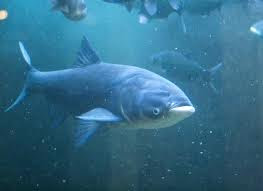 I haven't done much research, but I'm fairly confident in stating that this Asian Carp Aquarium will be the first in professional baseball -- maybe even all of professional sports. Sure, new carpeting is nice to look at, and has that gluey smell. And wi-fi and food options are certainly important at any modern ballpark. But those things, by themselves, aren't going to get the Twins the All-Star Game. Fans today want sexy features, and I don't know what is sexier to baseball than an Asian Carp Aquarium.


Where would we put this thing? Well, I guess the Twins could directly copycat the Marlins and just put it right behind home plate. This idea has some merit -- plus, given the average velocity of most Twins pitchers, the reinforced Plexiglas probably wouldn't even be necessary. Another option is actually right on the playing field: As long as the Twins don't sign a real power hitter, the deep right-center and left-center gaps of Target Field are unattainable for most of our players. That's unused real estate. A gigantic fish tank would at least occupy some space there until we get a real hitter. 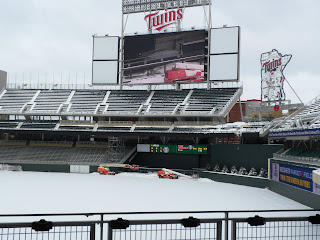 In the end, I'm doubtful that the Twins will go for this option. And if they did do an aquarium, I'm sure they would choose more "classic" Minnesota fish, like walleye, bass and perch. Asian Carp might not feel like the "Twins Way." But if the organization really wants to set itself apart from other stadiums, it's an idea at least worth considering. And financially, because the Twins would be doing the state a big favor by removing these carp from Minnesota lakes, I bet the DNR would subsidize this project. Now I'm speaking the Pohlad's language . . . .
Posted by Andrew at 9:26 AM