My New Year's Resolutions for Twins Fan From Afar 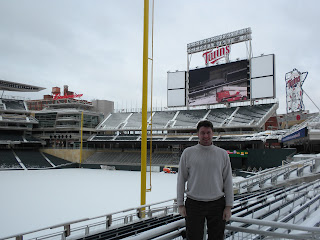 Everyone is posting their New Year's resolutions for the Twins for 2012, and I have enjoyed reading those. In fact, I don't have much more to add than, for example, what was posted at NoDak Twins Fan. I definitely agree that Mauer has to play 130 or so games behind the plate, and that Morneau and Span need to put the concussion issues behind them, in order for this team to play above .500 baseball. Because I don't have much to add on that front, I thought I would post some New Year's resolutions of my own for this blog. I'm a believer that goals and tasks are much more likely to be accomplished if they are written out (and seen by others), so here we go:

2. Redesign the background of the blog: This one might be accomplished in the next few days. I'd like to incorporate a picture I have taken at Target Field as the background for this blog, and get rid of the blue background that is currently there. I'm sure it's easy to do, but I'm sort of a luddite when it comes to technology.

3. Interview a Twins player or front office member: I like to think that the Twins are an approachable organization. Over the years, I have had some correspondence with Dave St. Peter and a few members of the communications staff on various issues. This one might be a reach, but I think it would be great for the blog, and of interest to Twins fans, to briefly interview a player or front office member.

4. Add New Britain Rock cats content: I live only about a half hour away from Rock Cats Stadium, but I only attend a few games per season. It's a shame. I plan to purchase a 6-game pack of tickets when they go on sale this year, and intend to add player photographs and game recaps following the games that I attend. I fully admit that I'm not up on Twins prospects like, for example, Seth Stohs, but I think that nothing beats a game recap written by someone who was there watching in person. Last season, I watched Joe Benson and Chris Parmelee play in what would be their second to last AA game ever. 2 short days later, I watched on TV as they made their major league debuts for the Twins. That's what makes minor league baseball great. One night, they're playing for 2,000 people and signing autographs in a parking lot in central Connecticut, and before you know it, they're wearing the TC hat and playing in the best stadium in baseball. Having Twins AA baseball just a stone's throw away from me is really a blessing, and I will using the fact that I am "from afar," to be add some (hopefully) great Rock Cats content in 2012.

5. Continue the satire every once and a while: I can't take baseball too seriously, especially if the team isn't very good again in 2012. There are only so many posts I can write about injuries, trades and "what the Twins must do to win in 2012." Every few weeks, I need a break. Frustration with the Twins is what has spawned posts like this and this. I truly admire bloggers who can write post after post of serious content, but I simply can't do it.

So there you have it. Hopefully by writing this post, I will be more likely to accomplish the goals set forth therein. Thanks to everyone that checks out this blog, whether it's every time I post, once a week, or once a month.