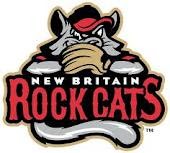 As I have mentioned before, living in Connecticut puts me just about 20 minutes or so from the home of the Twins' AA affiliate, the New Britain Rock Cats. One of my New Year's resolutions for this blog for 2012 was to provide more Rock Cats content. It makes sense, right? I'm no expert on the Twins' minor leaguers, but I do attend enough games to at least have some name recognition. I can only see the real Twins once or twice a year, so why not see tomorrow's stars today?

Yesterday I attended the Rock Cats' Hot Stove Luncheon, which was held at a hotel ballroom in central Connecticut. Apart from Rock Cat personnel, I would guess that there were probably around 300 people that attended. Many fans, and also some sponsors and members of the local New Britain community, comprised the crowd. I was most interested because former Twins' GM Bill Smith was the keynote speaker.

I wanted to provide you, my readers, with some quotes from Bill Smith regarding both the 2012 Rock Cats and Twins, as well as a couple interesting things that I picked up on. First off, Bill Smith was exactly the opposite of the gruff, sweaty, "no comment" personality that I had seen during some of his interviews when he was GM. He was affable, funny and extremely self-deprecating (he opened with a line to the effect of, when the team loses 99 games, someone has to be accountable -- and that person unfortunately was me). He mentioned that he never had any intention of leaving the Twins organization, and that he was happy in his new role, where he will actually be spending more time on player development. Now, onto the quotes:

On Miguel Sano: Has the "potential to be a Miguel Cabrera type player."

Joe Mauer: "100% healthy and intends to catch more than 120 games this season." He will also see time at first base and occasionally right field.

Justin Morneau: "We're confident he's going to be ready to go." Smith emphasized how detrimental concussions were, how teams are still learning more about them, and included Sidney Crosby as an example of how long-lasting and serious they can be.

Smith emphasised the Twins usage of the disabled list in 2011. I read it on another blog before, but the Twins lost 866 days to the disabled list. According to Smith, that translated into $28.8 million of salary. Pretty ridiculous.

On the Twins' performance last season: "Poor performance and lack of fundamental play" were the most frustrating aspects. This ties into later comments he made concerning player development at the AA level.

On AA call-ups Chris Parmelee and Joe Benson: They will get an opportunity to compete for a spot on the Twins opening day roster. Interestingly, Smith included Ben Revere with these two other players. Between what Terry Ryan has recently said about utilizing Trevor Pouffe in the outfield this season, and Smith's comments likening Revere to Parmelee and Benson, I'm starting to think that Revere may not be as likely to be starting in left field as I previously had thought, or, if he does, it may be in a platoon situation.

Rock Cats' manager Jeff Smith also spoke. He was a career minor leaguer, having played several seasons in New Britain. He said that his goal, aside from winning games, "is to have every player improve from game 1 to game 142." He suspected that, at some point in 2012, Rock Cats fans will see Aaron Hicks, and that Chris Herrmann and Logan Darnell would both be returning.

Jeff Smith's focus on player development was interesting for another reason. Bill Smith repeatedly said that, in the past several years, the Twins' best players all have come through New Britain (that makes sense, of course, as a matter of player progression). During his remarks, Bill Smith mentioned the instructional league, Class A Beloit, and AA Rock Cats as examples of organizations that prided themselves in player development. Not once during the 3 hour event was a single mention made of AAA Rochester. I'm reading between the lines a little here, but it makes some sense when you think about all the trouble the Twins have had with Rochester, and the fact that some of the guys coming up from AAA have not been fundamentally sound, or didn't seemed overly concerned with winning games. Bill Smith stated that call-ups from New Britain were prepared to play major league baseball. I think the negative implication from that statement, and the fact that Rochester was the only team never mentioned during the event, is that members of the organization do not believe that AAA is doing a good enough job developing players -- hence the house cleaning and promotion of Bruno to hitting coach.

In the end, this was a great event to attend. It was repeatedly emphasized that the Rock Cats and the Twins are both like families (for better or worse, I guess). And the event certainly had a family vibe to it. I'm still glad that Bill Smith got the axe as GM, but it's probably also fair to note that all the negative moves that fans criticized weren't done in a vacuum; Terry Ryan and the other staffers certainly had input. Hopefully he has more success in his new role. 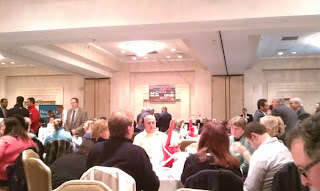