For a Twins fan, I had perhaps the best seat in the house. Literally 1 row behind me -- same seat number in fact -- Twins' General Manager Terry Ryan sat with a pencil, scorecard and notepad. Literally the 2 rows in front of me, radar guns, operated by a scout I didn't know, and by Rock Cats' pitcher Logan Darnell (who actually tossed a great game tonight). I saw the speed and location of every single pitch. I watched arguably the Twins' best pitching prospect since Johan Santana throw, from right behind home plate, and I wasn't disappointed.

I'm not going to lie. I was pretty excited for the game. And I can tell you, Alex Meyer is as advertised. I'm not saying he's a perfect prospect -- obviously he was far from perfect last night -- but I can tell you, in this small, small sample size, I have no doubt that the Twins made a great trade. Let's talk specifics.

I watched Alex Meyer's worst Rock Cats start. The start was not bad. One inning was bad, and here's the rundown: Meyer's third inning started off with a line out to center, and then a weakly hit roller down the third base line. Mark Sobolewski couldn't make the play, and it went for an infield single. Thereafter, there was a sharp single to right field, and Meyer must have become rattled, because he walked the next two batters. He clearly was off -- the missed fastballs to righty batters were up and out, not even close to strikes. There was a mound visit. In other words, something with both his composure and control was off. That second walk resulted in a run, and the next batter singled on (what I remember to be) a sharply hit grounder to the hole between shortstop and third base. The next batter hit a legitimate sacrifice fly to left, and all the sudden it's a 4-run inning.

Meyer's fastball throughout his start was consistently 94-95, and hit 96 multiple times. His stuff wasn't slower, or weaker, during that bad third inning, and his velocity was just as good out of the stretch. He simply lacked control and precision during those 20 minutes. One takeaway: AA players can hit a 96 MPH fastball down the middle, when they are expecting it. Meyer's breaking stuff -- see this excellent piece from the Hartford Courant's Dom Amore -- was consistently around 79.

Here's the best part of the story -- and also the reason why I have no concern with Alex Meyer: that third inning was an aberration. Instead of giving up as Terry Ryan and other scouts watched him scuffle, Meyer battled, and pitched 3 more innings, walking 0, allowing 1 single, and striking out 3. Rather than throw in the towel, Meyer demonstrated in innings 4-6 that he is the genuine article; he can be what we expect him to be.

Alex Meyer dominated most of the hitters he faced. There were many embarrassing swings, many called strikes that baffled batters, and many weakly hit grounders and fly balls. And I will note (as a fan, not a 100 percent objective observer), that Meyer did get pinched on a few pitches in that rough third inning. I did hear a couple groans from Mr. Ryan.

So here's the bottom line, as I have witnessed from 1 Alex Meyer start: he throws really, really hard, and it intimidates batters; he has a great knuckle-curve that breaks down pretty severely; the fastball reached 96 on a night when it was in the low 50s in Connecticut (he has reached 98 in better weather); he didn't give up an extra-base hit in his "worst" start, although there were a few deep fly balls. He did get rattled when he got in trouble in that inning, but again, the next 3 innings pitched suggest that he can rebound from a rough frame. The "line": 6 inning, 4 earned runs, 5 hits, 8 Ks, 3 BBs, and a loss. The real story: one very bad inning in front of a nerve-wracking crowd, and an otherwise dominating start. And one hell of a fastball. 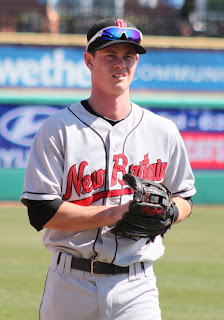 One other strange item from last night: James Beresford, probably my favorite Rock Cats player this season, was tossed from the game. I've been asked a few times what happened, so here is the story as I witnessed it: To preface this story, I should note that, going back to last season, I really have enjoyed watching Beresford play. He is an above-average defender, and although he will never hit for big power, I have held out hope that he can become a singles and walk machine such that he can keep advancing up the system. James is on his way. As of tonight, he's batting .333 on the season after having to fight off a couple other players last-minute for a starting role. He's taking good at-bats, and is walking when he can, and he had extra-base hits in consecutive games last week. In short, a good start for Beresford.

Last night, in a mid-game at-bat against a tough LOOGY, Beresford took a fastball for a strike, which I believed (from my home plate vantage point) to be a few inches outside of the zone. He took longer than normal between pitches, speaking with the ump. The next pitch looked like it hit the outside corner, but Beresford also took that one, again speaking with the ump. The third pitch was a breaking ball in the dirt, which Beresford swung at. The ump rung him up, and James indicated that there was a foul tip. Nonetheless, it was a third strike for the third out. As Beresford bent down and undid his shin guard, some words must have been exchanged, because he was immediately tossed. So there's the story as I saw it.

So it was a strange game. I went expecting Alex Meyer to dominate, and he didn't. But at the same time, I saw just how scary and dominate he can -- and will -- be. Going from 96 to a wicked 79 mph knuckle curve is devastating. Not many AA pitchers can do that. Twins fans, rest assured, I believe that this was a great trade. Nothing against Denard Span -- one of my favorite Twins when he was in uniform -- but Meyer will be an excellent return for many, many years to come.
Posted by Andrew at 11:01 PM